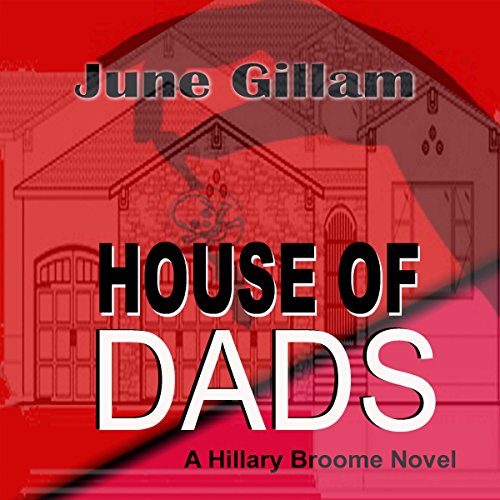 By: June Gillam
Narrated by: Ginny Harman
Free with a 30-day trial

When a powerful California developer collapses at a funeral, Hillary Broome's caught in a network of jealousy, greed, and secrets that could topple financial institutions and destroy families. In the midst of deciding whether to elope with detective Ed Kiffin, she's forced to investigate suspected foul play from disgruntled home-owners, mortgage bankers, and family members spiraling downward into homicidal madness that puts other lives in danger, as well.

What listeners say about House of Dads

Note: While this is Book 2 in the series, it works fine as a stand alone story.

The patriarch of the California Broome family has passed away and Hillary is off to attend the funeral and also get the details for her article at the newspaper. She’s a cousin to the powerful family, who own a construction company, and she has a lot to learn about them. During the funeral, Teddy, who had inherited the construction company, dies unexpectedly. Everyone suspects murder. Meanwhile, Hillary and Detective Ed Kiffin have had a whirlwind romance since they met two months ago in Book 1, House of Cuts.

I quite enjoyed the previous book in this series and this book was not quite as good. For me, the main disappointment was that the romance eclipsed the mystery and I’m not big on romance plots. While the first book had a solid murder mystery to pursue, this book didn’t have much detective work going on. Solving the case was more of an accident, of things falling into place at the last minute. While these two things made this story a bit less enjoyable than the first book, I still enjoyed it as a quick, cozy murder mystery.

The patriarch of the Broome Construction company set up his will so that only a male heir can inherit it, he having rather dated ideas about women in the work force. With Teddy suddenly dead, and no male heir waiting in the wings, the Broome women start battling for control of the company. Maggie is the remaining matriarch and her daughter Violet, per a clause in the will, has temporary control over the company until a male heir appears. Maggie wants control of the company and hatches an unlikely scheme for gaining that control. Meanwhile, Violet and her husband decide to get busy reproducing, hoping for a son.

There’s plenty of spying on one another and swapping gossip. In fact Hillary discovers a key piece of info and decides to share it with one of these ladies. Another body hits the floor. I thought it a bit naive of Hillary to share this info but then again, I know that she really wants to be accepted by this branch of her family.

Walt, Ed’s work partner, isn’t a big fan of the institution of marriage. However, he tends to enjoy his freedom a bit too much, over eating and over drinking. Still, he makes a charming side kick to Ed, who still struggles with his smoking addiction. While Ed has no doubts about a life with Hillary, she does have doubts. This creates some angsty romance stuff throughout the story that I found a little boring.

In the end, there’s a small twist concerning the number of murders that I quite liked. However, catching the murderer was a happenstance kind of thing that I felt was way too scripted. Over all, this book wasn’t as exciting and innovative as Book 1. It was still a pleasant read and I’m curious to see what happens to Hillary in Book 3.

I received a copy of this audiobook from the author (via iRead Book Tours – thanks!) at no cost in exchange for an honest review.

Narration: Ginny Harman’s narration was OK. I kept getting the ladies mixed up as they sounded so similar. The male voices were easy to keep straight as they were each distinct.

House of Dads--Suspenseful and Engaging!

Would you consider the audio edition of House of Dads to be better than the print version?

The story is the same between the audio and print versions; they are both suspenseful and engaging. It ultimately depends on how an individual reader best enjoys their reading adventures. The print version puts you in charge of how fast you read, the tone you manufacture, and what parts of the book you savor. The audio version offers an exciting tone presented by Ginny Harman that readers only create in their mind when reading. I love audiobooks!

I still enjoy Hillary, but Violet had some dark and dangerous emotions that were oddly intriguing. It seems she could not help to become the person she is when her mother is so dismissive and vocal about her distain about her daughter. Violet is trying to be strong and show her mother she is right for the job...can anyone stay sane in that situation?

I enjoyed the chapters titled "Violet." They were dark, but one could only be sympathetic to Violet's plight. The voice Ginny Harman uses adds to the depths of despair.

No extreme reactions, but Walt and his eating habits made me giggle and I was sad by all the turmoil Violet dealt with because of her mother's comments.

This is the second book in the Hillary Broome series which continues to provide a thrilling story. Each chapter is cleverly written from the first-person perspective of a main character: Violet, Hillary, Ed—offering the reader an intimate look into each character’s thoughts and motivations. Ginny Harman, the narrator, adds an emotional tone to Violet’s despair, Hillary’s thoughts of her father and her estranged mother, and Ed’s feelings of his daughter who long ago lost her life in a hit and run. This was a wonderful experience.