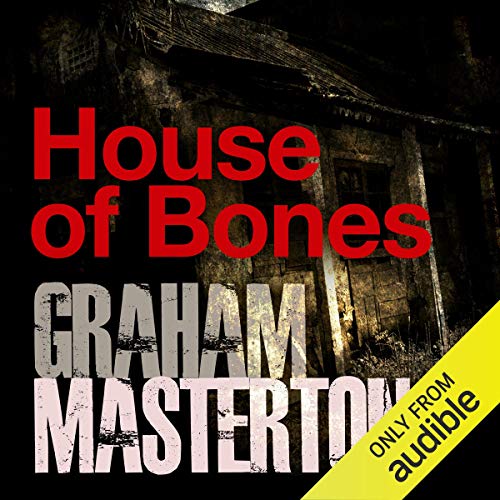 By: Graham Masterton
Narrated by: Tristan Bernays
Try for $0.00

From the best-selling master of the genre - No one lives for very long in the houses they buy from Mr Vane. Neighbours complain of noises that chill the blood and then deathly silence.

John has just joined Blight, Simpson and Vane estate agency and has no idea about the hidden forces inside Mr Vanes properties, but he's about to find out...

What listeners say about House of Bones

Would you try another book from Graham Masterton and/or Tristan Bernays?

Written by Masterton, yes, read by Tristan Bernays, no way.

What could Graham Masterton have done to make this a more enjoyable book for you?

Describe it as a young adult novel.

Speech cadence. He had the enthusiasm of a rural sportscaster. Wrong genre for his over the top delivery. Very outputting. I want to return this waste of credit.

Annoyed. I want a refund!

I can't go through the book or enjoy the story

because the narrator is getting on my nerves 🤬 he think he's performing great and that's a problem... he is so irritating that I don't even know what this book is about

I enjoyed this. it would be a good story for Dr Who! A good horror for young teenagera.

Would you try another book written by Graham Masterton or narrated by Tristan Bernays?

No, absolutely not. Despite the cover, this is a teenage book, with dramatically unbelievable characters, an incredibly poorly conceived "mystery" and repetitive action sequences. No thinking or research required - a convenient uncle is conjured up who explains all, including that there is magic in the world, a fact that he apparently never shared with his family. He isn't even a devoted Christian, despite the Christian cross being more powerful than all this ancient magic. None of these people seem to think of the greater implications of what is happening. Instead the main character is thinking of copulating with one of two females in the book.

Tristan Bernays makes a valiant effort at accents, doing such a good job that it feels like nobody in the book ever visited school. The characters are meant to work in an estate agent, but any sane customer would run for the hills when hearing them. When not doing accents, Mr Bernays is apparently focused on rushing through the book as quickly as possible, which I can not entirely blame him for, but makes his narrative downright annoying to listen to, as it feels that loosing attention for even a second might land you in the next scene. Not the relaxing experience I was looking for, that is for sure.

Annoyance at just how bad the whole thing was. I kept waiting for the big twist that might justify the painful hours, but instead it was getting worse and worse. I am sure, had I been 12 I would have been fascinated. I am also quite disappointed by the other reviews, as usually a high score has been fairly indicative of my own enjoyment of an audiobook and I am not entirely sure how to sift out future disasters like this from my list. I will note that I felt angry when the whole "evil druids of the past being beaten back by the glory of Christ" part came up. It was incredibly heavy handed and just...really unfortunate - not to mention that any neo pagans listening could get fairly upset. I only live in a country with a druidic tradition and feel upset. Would it really have been that hard to write "SOME druids seeing the end being neigh came up with this evil long term, but shockingly poorly thought out plan" rather than indicting an entire culture as blood crazed lunatics that would make Aztec sun worshippers blush?

I don't understand how you can take 4 and a half hours to say so very little. I feel that some of the Famous Five's adventures were more complex, whilst significantly shorter. Unless you are 16 or under, I would strongly recommend avoiding this book and audiobook.

Easy listening story. Would love to hear more of his books, NY husband Aldo liked thus book. You just wanted to keep on listening to it.