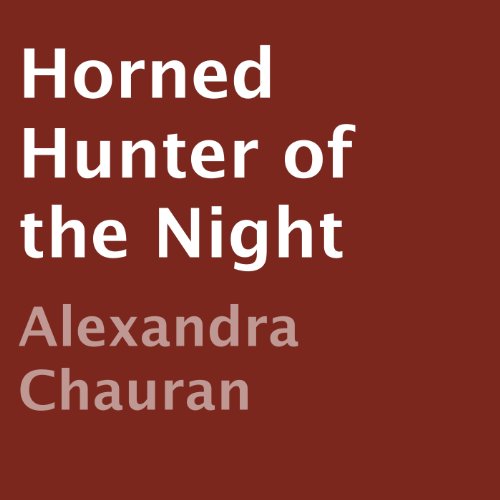 Horned Hunter of the Night

By: Alexandra Chauran
Narrated by: Kay Nazarchyk
Length: 1 hr and 9 mins
Categories: Erotica, Literature & Fiction
3.5 out of 5 stars 3.5 (4 ratings)
This title is included in Audible Escape

Horned Hunter of the Night

Diana has enough to worry about after going away to college and leaving her family to struggle with problems back home. Now she has an eerie pull towards the occult that she can't seem to resist. Feeling lost, like she isn't living up to her religious family's expectations, she desperately seeks acceptance and love in the arms of a man. Just one problem, though: The man of her dreams isn't merely human.

The story would have been more enjoyable to me as a longer treatment of the characters and traditions. It would have been interesting to see the protagonist dealing with her roommate and family after her initiation and to see how that would affect her life. Also some members of her coven would likely have expressed at least some displeasure at her very fast advancement within the group. Then, beyond that, she would also need to deal with some consequences of her meddling with others' lives through magic.

Did Kay Nazarchyk do a good job differentiating all the characters? How?

The narration was OK and easy to understand but needed work on characterization and inflection. There wasn't much variation between character voices.

Maybe. Paranormal fantasies targeted towards college age women aren't my normal wheelhouse. Also, this story is straight up explicit erotica, so any movie based on this would tend towards the X-rated category.

What did you love best about Horned Hunter of the Night?

It had just the right amount of eroticism and spirituality. The story was interesting and moved at a good pace.

Diana. She was very determined once she set her mind to something.

When Diana goes to dinner at her new friends house and meets all the witches from the coven.