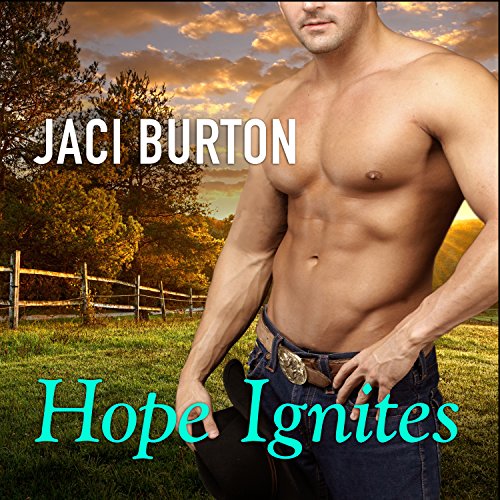 By: Jaci Burton
Narrated by: Saskia Maarleveld
Try for $0.00

When a movie crew asks to film on his cattle ranch, Logan McCormack doesn't expect Desiree Jenkins, the young, sought-after star, to be so open, so down-to-earth, or so intimately interested in him. But the last thing a loner like Logan needs is a distraction like Des, who wouldn't understand what it's like to live peacefully off the land.

But it's Logan who doesn't understand. What Des wants is an escape from paparazzi and gossip columns, and she's found it at Logan's ranch. Now it's up to her to prove that she's like any other girl looking to be accepted for who she is. And she's hoping that it's by this real-life cowboy who has everything it takes - and more - to give her the kind of happily ever after that can't be found in the movies.

"Burton once again delivers in this small-town romance with a sexy hero and a likeable heroine." (RT Book Reviews)

What listeners say about Hope Ignites

Grumpy cowboy meets Hollywood...what could go wrong? I really enjoyed this. When the oldest brother has land, Hollywood thinks it’s a perfect movie site, then why wouldn’t he jump at the chance to welcome their stay? Well, this grumpy cowboy doesn’t quiet offer with a smiling face and a cheerful how do you do; but this Hollywood starlet isn’t soft and meek and she definitely doesn’t even blink at his churlish behavior...in fact, she might even figure out the secret at chiseling away the block of ice that has surrounded this cowboys heart wether he likes it or not. Their chemistry is really sweet and hot! Great listen, can’t wait til the next!

I love Jaci Burton's books. They are easy to read and safe story lines. Much like Sawyer Bennett, this author needs to dig deeper into real life struggles. This book was safe and comfortable. I read it quickly but it was very easy to put down and pick up when I had a few minutes. I didn't have any of those, "I can't put it down, it's so good" moments.

Awe I thought this book was sweet, and just the right kind of romance.
Desiree is an actress and she happens to find herself on Logan’s ranch for filming. When she meets him its sweet she sees he isn’t really interested in what she does but income is income and his kitchen worker Martha is a diehard fan.

I loved the relationship Logan has with Martha she is the mother figure he needed. It is so sweet and I love that she treats him like family.

Desiree’s character is awesome, I like that she was strong and knew herself she didn’t get caught up on looks or insecure about dumb things. This made the book really stand out for me. I liked that she didn’t feel like your typical Heroine. She was Logan’s match that is for sure. He was kind of brute(y), and standoffish, toward everyone but Martha.

Overall I enjoyed the book and I would continue with the series. I love small town books with great stories and this is exactly the kind of book I needed.

The narration is great I have always been a fan of Saskia, she brings the characters their own voices without making it sound hard at all. LOVED!

guy we are supposed to be rooting for is a jerk

guy is a jerk. that's not what heroine calls him but that's the review worthy language. I couldn't stand to spend anyone time with him beyond 2 hours. I liked her and hate the fact that's who she's going to end up with. no character development on him. housekeeper pushes him to do anything relating to people. he does it as wants to eat hot food. that's all the depth to him. performance good.

Steamy & sexy! A independent women who can hold her own against a hot as hell alpha male! Not as much action as the 1st but, still worth it. Narrator was great as well.