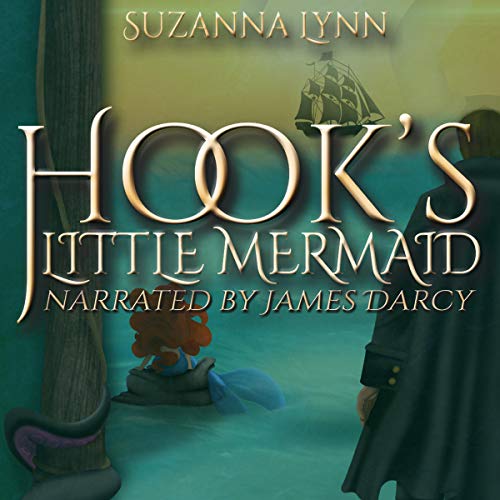 By: Suzanna Lynn
Narrated by: James Darcy
Try for $0.00

Captain James Hook was once a good man trying to make a somewhat honest living. He is a pirate, after all. However, after getting word that a boy named Peter Pan played a part in the death of a dear loved one, Hook makes it his sole purpose to hunt down and destroy the fiend.

On his journey for vengeance, the captain encounters many new comrades, including a young girl named Red and a fairy called Tinker Bell, and both push him to reconsider his desire for justice.

The accidental rescue of a mermaid leads him on a whirlwind adventure in Neverland. The journey is not a simple one, considering Pan, the Lost Boys, mermaids, and magic all come into play. After several misadventures, Hook must choose between the possibility of a new life with love and his much-desired retaliation against Pan.

Once everything is said and done, will the captain be able to overcome his need for revenge? Will he let compassion steer him toward love? Or will Captain Hook live up to his villainous reputation?

What made the experience of listening to Hook's Little Mermaid the most enjoyable?

I enjoyed this audiobook Hooks Little MermaidI really liked the spin Suzanna Lynn created, keeping true to the age old story while putting her own imagination in the world of Neverland! The writing was good giving me a good pirate feel to the first person narrative. (I was totally picturing the guy who played captain hook in Once Upon a Time.

I enjoyed listening to this fairy tale. It was a cute twist of stories that I partially knew. I had never thought of Captain Hook from Peter Pan as a good guy or knowing the little mermaid. This book was not in my normal listening genre, but I found it very enjoyable. Clean listen and appropriate for most ages. The narrator did a very good performance. I was voluntarily provided with this review copy audiobook at no charge by the author, narrator, and/or publisher.

great back story on the infamous captain hook

I highly enjoyed this book. it was a light and quick listen but still worth the read. I found the backstory pretty great. although I wonder why the names Ursula and Ariel weren't used? maybe copyright issues?
I love retelling or the other side of things point of view. this is a book I would listen to again.

This story is plain and simply fun. The narrator, James Darcy, does a nice job bringing the characters to life. You will enjoy reading this story.

I think this may have been one of the first books read by this narrator. He speaks very quickly, though still clearly. I think a more seasoned reader would have read this book in 5 hours.

That said, he did a good job with various voices.

The audio quality of this book is terrible, and the reader sounds very inexperienced. As for the book itself, it has little depth of character, and is predictable.

What did you love best about Hook's Little Mermaid?

The characters, especially Hook and his mannerisms

How nothing was what I expected! Even with out heavy romance it was still very much one of those books that pull you in!

The fight scene towards the end with Hook and the villian

Oh yes! If only I had the time!

Really enjoyed this story, always loved Peter Pan so reading this side story was fantastic. By the end I felt empathy for Captain Hook, he started off a good man. James Darcy has a perfect voice for this story, at times the pause appeared a little longer than normal which I assume is down to editing.
This book was given to me by the narrator, author and I`m voluntarily offering my review

Any additional comments?
I enjoyed this new look at Captain Hook. He is a good guy, I mean he is a pirate but he isn't a BAD pirate. I enjoyed the book from start to finish. The narrator took some getting used to but did a pretty good job. It isn't a long book and I listened to it in one day. Not a book you are going to want to put down to do something and come back to but one you will want to read start to finish as quickly as possible. The author does a great job with her characters and keeping the story entertaining start to finish. I cannot wait to see what she comes up with next! Really good book 4/5.

Peter Pan is one of my favorite books. I loved this sort of "prequel " and the other stories that crossed paths with this one. The only thing that bothered me was changing the story of how a fairy is born.

Absolutely! The narrator is not my favorite, but he did a good job and definitely grew on me. He was good at putting emotion into their voices. The story was intriguing and fast paced. If the next book were out, I'd be listening to it right now!!

I recommend this book wholeheartedly.