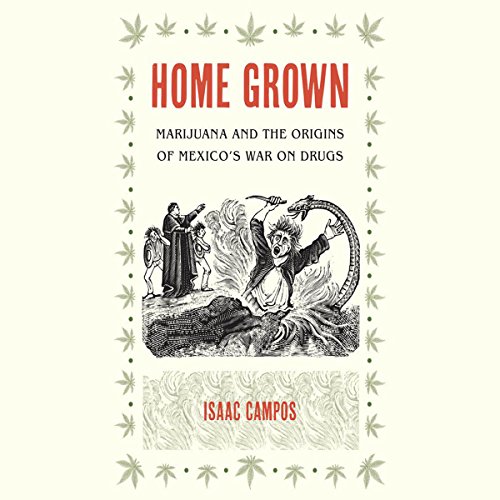 Historian Isaac Campos combines wide-ranging archival research with the latest scholarship on the social and cultural dimensions of drug-related behavior in this telling of marijuana's remarkable history in Mexico. Introduced in the sixteenth century by the Spanish, cannabis came to Mexico as an industrial fiber and symbol of European empire. But, Campos demonstrates, as it gradually spread to indigenous pharmacopoeias, then prisons and soldiers' barracks, it took on both a Mexican name--marijuana - and identity as a quintessentially "Mexican" drug. A century ago, Mexicans believed that marijuana could instantly trigger madness and violence in its users, and the drug was outlawed nationwide in 1920.

Home Grown thus traces the deep roots of the antidrug ideology and prohibitionist policies that anchor the drug-war violence that engulfs Mexico today. Campos also counters the standard narrative of modern drug wars, which casts global drug prohibition as a sort of informal American cultural colonization. Instead, he argues, Mexican ideas were the foundation for notions of "reefer madness" in the United States. This book is an indispensible guide for anyone who hopes to understand the deep and complex origins of marijuana's controversial place in North American history.

What listeners say about Home Grown

Hundreds of Years of the War on Drugs

Home Grown is the Mexican brother-in-law to Traffik, but unlike the movie and TV mini series, author Isaac Campos will make you more incredulous and angry than heartbroken.

There are so many players in the “game,” and so many political angles, it made my mind reel. If at all possible, the Mexican government might be in a worse situation than the U.S. in the War on Drugs. The display of policy ignorance on marijuana will make you cringe, and the power of fear-mongering at its strongest on display will make you rage.

A well researched book, written for a general audience, about the drug trade and business in Mexico that goes back hundreds of years. You will not be able to stop listening.