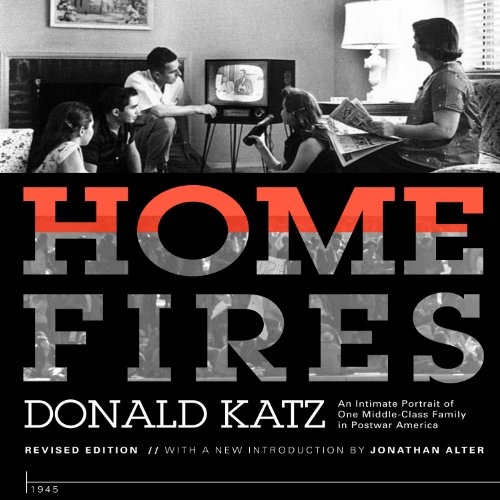 Home Fires is the powerful saga of the Gordon family - real people, names unchanged. Spanning nearly five decades, from the end of World War II to the early 1990s, their story has the scope, depth, wealth of incident, and emotional intensity of a great novel, and an abundance of humor, scandal, warmth, and trauma - the recognizable components of family life. This is also a masterful chronicle of the turbulent postwar era, illuminating the interplay between private life and profound cultural changes.

Donald Katz begins his account in 1945, when Sam Gordon comes home from the war to his young wife, Eve, and their two-year-old, Susan, eager to move his family into the growing middle class. After a few years in the Bronx, Sam and Eve move to a new Long Island subdivision and have two more children. As the '50s yield to the '60s, the younger Gordons fly out into the culture like shrapnel from an artillery shell, each tracing a unique trajectory: Susan, early into rock 'n' roll and civil rights, Vassar girl, feminist, author of "The Politics of Orgasm", and recovering drug addict; Lorraine, teenage beatnik and leftie, one-time member of a women's rock band, longtime follower of an Indian religious teacher; Sheila, the "good" daughter who married then remarried, with a big suburban house, two kids, and a therapist; and Ricky, the youngest, witness to the family traumas and cause of a few himself, openly gay, eclectically New Age, and a successful songwriter and composer. And all Sam and Eve ever wanted - like millions of others who had experienced the Depression and the war - was a "normal family".

Katz tells the Gordons' story - the unraveling of Sam's and Eve's American dream, to the slow, hopeful reknitting of the family - marshaling a vivid cast of supporting characters. Deftly juxtaposing day-to-day family life with landmark public events, Katz creates a rich and revealing portrait of the second half of the 20th century in America.

What listeners say about Home Fires

The Way We Were

The word "epic" is thrown around a lot, especially by publicists. This is a rare case where it is wholly deserved.

I first read "Home Fires" around 15 years ago, discovering a monumental work that is really two ambitious books in one. It is the intimate, multigenerational story of a real American family, which in itself would be no small accomplishment. But then Don Katz uses the family saga as a framework on which he hangs the country's entire postwar social history. There is Vietnam, then folksingers and later rock 'n' roll, drugs, economic turmoil and our migration to the suburbs. It is related in such rich detail that countless throwaway sentences must have taken a week's research apiece.

As a new audiobook all these years later, "Home Fires" seems a new experience, somehow even more substantive and insightful than before. Narrator Joe Barrett weaves his way carefully through the twists and turns of each year, one after another. His voicing of characters is superb. Sure, all the Brooklyn males may sound more or less like Sam Gordon, but Mr. Barrett manages boys and girls, women, singers and prominent figures. His LBJ is passable, and his Richard Nixon pitch-perfect. Like the best of audiobooks, "the read" adds new dimensions to a remarkable work of journalism and literature. It's a long book. Totally worth it.

A Struggle to Savor!

Because Home Fires is such a deliciously lengthy listen, don't be surprised if you often need to put it aside, because like a box of fine chocolate, it's a treat to be savored. Encompassing a half-century, Donald Katz's rich, magical weaving of history and no-holds-barred biography is seamless in its compelling beauty and complexity. Not one Gordon family member escapes the steady intensity of Katz's burning gaze into his or her life.

Especially those of us Baby Boomers caught in the undertow of the bewildering historical and cultural tsunamis which battered the last half of the 20th century will readily relate to the pain, struggle, confusion, and hope which unceasingly washed over us. Listening to gifted narrator Joe Barrett infuse Katz's masterpiece with knowing, understanding breath is an unexpectedly rare treat no Audible listener should miss, and gaining the added opportunity to hear Ricky Ian Gordon sum up his family's saga could not have been a more fulfilling conclusion.

You'll have yourself to thank for not missing this superlative family saga!

Started out ok and just got more and more discouraging. Well read! But I couldn't finish it.

My god, the pain these well-meaning parents went through; one has to wonder, if you grew up in the 60s, did my parents too?

If you could sum up Home Fires in three words, what would they be?

The people, especially Mr.and Mrs. Gordon and the depiction of the 60s-70s.

The narrator takes a few risks with the voices / accents. I think they work. Overall, he does a wonderful job. I'll look for for his other titles.

How do you feel after an O'Neill play or a Roth novel?

If you could sum up Home Fires in three words, what would they be?

What was one of the most memorable moments of Home Fires?

Joe Barrett does a great job with what you think the voices would sound like. Brings good emotion to the story.

If you grew up in this era, and had parents from the depression, with siblings spread apart in age like I did. This book will bring so many memories & emotions back to you. There are lessons for everyone in the book though. Very entertaining!

this is such a wonderful life story of a normal family. I truly enjoyed it.

EVE. At the end of the day the story was hers

What an amazing natural family and they were able to stay together and love each other and experience the pits of life and raise above it. Now I want to read the books written by Susan and Lorraine. Ricky is 1 brave man with the love and support and understanding of this amazing family gave full expression of himself. Congratulations to all, you had the inherent strength regardless of external influences to overcome.

Having a wife the terapist, and struggling with anxiety myself. Semicolon this book gives a succinct looked into the imperfection of life and family.

Would you consider the audio edition of Home Fires to be better than the print version?

yes.. felt as if I was being told the family story (a bit gossipy)

loved the natural mix of a family story and the historical references and description of the times the family lived in. I like all the characters whose personalities shone through the descriptive narrative

The accent given to each member brought them to life

its too long for one sitting but great book

loved this and would highly recommend