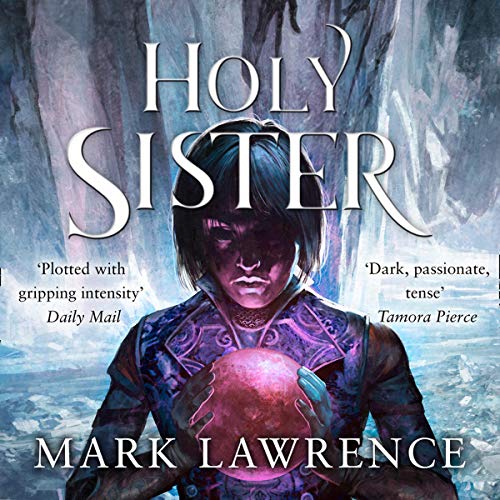 By: Mark Lawrence
Narrated by: Helen Duff
Try for $0.00

Nona Grey’s story reaches its shattering conclusion in the third instalment of Book of the Ancestor.

They came against her as a child. Now they face the woman.

The ice is advancing, the Corridor narrowing, and the empire is under siege from the Scithrowl in the east and the Durns in the west. Everywhere, the emperor’s armies are in retreat.

Nona faces the final challenges that must be overcome if she is to become a full sister in the order of her choice. But it seems unlikely that Nona and her friends will have time to earn a nun’s habit before war is on their doorstep.

Even a warrior like Nona cannot hope to turn the tide of war. The shiphearts offer strength that she might use to protect those she loves, but it’s a power that corrupts. A final battle is coming in which she will be torn between friends, unable to save them all. A battle in which her own demons will try to unmake her. A battle in which hearts will be broken, lovers lost, thrones burned.

Holy Sister completes the Book of the Ancestor trilogy that began with Red Sister and Grey Sister. A groundbreaking series, it has established Mark Lawrence as one of the most exciting new voices in modern speculative fiction.

"Dark, passionate, tense, with a female hero anyone could relate to - I was utterly fascinated! This is no pretty, flowery tale, but one of vastly different people struggling to survive when a hostile government comes to power." (Number one New York Times best-selling author Tamora Pierce)

What listeners say about Holy Sister

Nice Twist on an old format

I enjoyed the audio version. The storyline is solid, I understand some people complaining about the flashback but I thought they were done well and I didn’t have any concerns. Solid story would recommend

Jumping from past to present is annoying!!

seriously, if this happens in the second or first book, I would not have bought the third. jumping back and forth is confusing and annoying to me. I didn't like it. at all.

One of the best new fantasy series

Really impressed with the writing and the story Mark Lawrence has produced. Each book has a proper ending, and the last book is no different. It has left me satisfied with all ends tied up.
The narrater Helen Duff was perfect as always.
I'm looking forward to exploring his other book series.

Amazing! loved every second of this trilogy.

Recomend this series to all that loves fiction.

Mark Lawrence makes you fall in love with characters and makes you hate characters ,his character development is amazing.

Very good ending to an wonderful, gory, thrilling and beatifull arc. Would recomend very much

In this trilogy the story had more substance than his previous trilogies, but I missed the cheeky language, that made me love his previous books. Any way definitely worth a read 😊. Looking forward to Lawrence‘s next work 😋

Thoroughly enjoyed this edge-of-the-seat finish to a very satisfying series. Great character and plot development. A few tears as well. Nona and the nuns of Sweet Mercy are a fantastic creation.

I think I am becoming jaded with fantasy as i have overindulged however Mr Lawrence's adventure has been a good tale to bring me hope in world building and original magics.

Holy sister is the culmination of the series and is a fitting ending. Even though I felt it could have been expanded upon as the world is so interesting. I see more books coming.

The characters develop well & their own lives are a good tangle making for decent surprises.

I would recommend this as a book and a series.

The series has been sci-fi-fantasy brilliance

A narrator is nothing without words to speak, though. These are some of the best words. I was in tears for about the last third of this book. The whole series has been engaging, and I can see so much possibility in the world/universe that Mark Lawrence has created - both past and future, to make more epic forays into the world of Abeth.

Can’t believe it’s over! Great book, worthy of any bodies time! Will miss the sisters of sweet mercy and Nona; all leaves must fall!

This series marks a jump in writing quality and it wasn’t as though the others are shabby in quality.

There is a weight to the prose that seems to make the story linger, without rushing headlong, or being dull.

This is where the threads come together and it doesn’t disappoint with an almighty character arc, tweaked by events and opportunity with enough turns to keep you guessing and await with anticipation.

If there was to be a gripe it would be that you are kept at arms length to the opposing forces with the conclusion. You may get a sword in the face, but nary a glimpse at who or what are driving the armies and Emperor’s sister.

Abbess Glass provides a beat touch to oppose war, without the need of Nona to become a Jorglike smarta***, which was especially neat.

That distance and in keeping events close allows Nona to fight and discover herself with a very deft touch. Other characters in the various trilogies may appeal more, but none are as well written, or cone from the page with the audio presentation.

A cracking series - and well finished in a not unexpected way.

After a blistering part 1 and a less wonderful part 2 the 3rd part of this trilogy was a great disappointment. The plot is too fantastic to allow suspension of belief and whilst he seemed to have an understanding of the girls as they grow to maturity it is lost. I was very disappointed.

Love the book and the narration style, however I hate the mouth sounds and page turning sounds

Incredible journey through another broken empire

Loved every minute of the series even the second time around. Cannot recommend enough

It was well worth listening to this book but it did take a while to follow all the various story lines for the various characters.
I'm glad I persevered, but reckon it would have be easier to read.

A wonderfully well crafted journey from behind to end. A very well crafted world with some great characters and superb story. A lot to love. Narration was brilliant, some superb accents possibly the best i heard so far.

It's definitely worth your time.

A puzzle made of sharp glass pieces, that’s how I would describe the ending in the final instalment of the ‘Book of the ancestor’ trilogy.
A tightly woven plot and with as many unexpected twists and turns, it was full of moments of illation, sacrifice, revelations, characters that made hard choices and despite of the cost would make them again, and of course, bloody action.

The narration by Helen Duff was nothing short of excellent, though I loved her voice for Nona, Clera still remains my favourite.

I’ll finish off with a quote from ‘Red Sister’ that kind of summarises how I felt.

"A book is as dangerous a journey as any you might make. The person who closes the back cover may not be the same as the person who opened the front."

This was a 4.5 stars for me. I really really liked it.

I loved the pace, the battles, the story, the gore and the hidden romance. So much fun. As satisfying as the end was, I just wanted it to keep going.

Helen Duff does an incredible job with this book. her accents and voicing of the different characters gives the story so much depth and life. Lawrence paints a wide, multifaceted story arc and gives it a satisfying ending with this third novel. highly recommend this series!! especially loved the female-centred narrative and subtle nods to gender neutrality (e.g. a female Emperor is called an Emperor and a female Lord is called a Lord. you also get so used to ‘she’ being used for minor characters where the standard default is ‘he’, that when once Lawrence does use ‘he’, you do a double-take. brilliant :))

What a great wrap up to the series! There were a few moments in the plot that could have had more explanation but overall a great story line and character development. Really enjoyed it

Isn't it great to find a new author! Now, off to read every other book he's written.

Such a beautifully written series with strong female characters. Helen Duff is the most brilliant narrator I have ever listened to. Each character had a different accent. Truly amazing.

This book is nowhere near as good as the first two, to the point where I will never recommend this series to anyone.

I was hooked and loving the first two books of the trilogy, but found this book to squander all their setup. To not spoil them, I will just say that the previous titles had set up expectations regarding future events, when Holy Sister catches up to these events they are mildly retconned and rendered underwhelming.

The structure of Holy Sister is also markedly different from Red and Grey, where they had a roughly equal mix of politicking and actiony-oriented arcs, that would bleed into and influence one another, Holy sister does not. Instead it goes for a mix between total war and a heist, neither of which are handled pooly, or especially well in my opinion. Were it not for how annoyingly simply (to me at least) everything wraps up, not only its own plotlines but an entire trilogy's, it would be a 3 star, maybe 4 star book. But alas.

excellent series - a must read

One of the best series I have ever read. Will come back to it again and again.

The Hatrick of Glorious Storytelling

Mark Lawrence's narrative combined with Helen Duff's narration brings life and love to the concluding part of the Trilogy of the Ancestor.

The miracle of language, that it can provoke deep and sincere emotion from mere thought, has never been more evident than in the conclusion of this tale.

A story of deep, abiding devotion: to place; to fath; to humanity... this will draw you in to depths of imagination and time will simply disappear.

One of the best fantasy books ever

This series has all the elements of each genre, thriller, mystery, fantasy, love and comedy. Loved every minute of all three books. So sad that the story has finished.