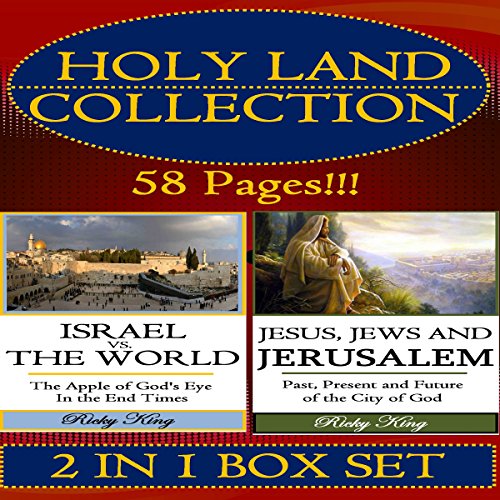 Israel vs. The World: The Apple of God's Eye in the End of Time; and Jesus, Jews & Jerusalem: Past, Present and Future of the City
By: Ricky King
Narrated by: Trevor Clinger
Length: 1 hr and 11 mins
Categories: History, Ancient
4.5 out of 5 stars 4.3 (7 ratings)

When discussing Israel and its long history of conflict, the emotions are so charged and for many the stakes are so high that even engaging in a simple conversation about the subject can be like running a marathon of endlessly heated ideas and never-ending historical perspectives.

In telling this story, I am not interested in taking any side. I just want to tell the story of how one small nation and a small group of people have had the tenacity and courage to defy the odds and preserve an ancient culture that has become the epicenter of not just conflict but religion, philosophy and human society as a whole.

Because Israel has contributed so much to all of us, what was once just an Israelite culture has grown to become what is by and large an inherited world culture. As the scriptures promised to Abraham, "I will make your descendants countless as the dust of the earth; if anyone could count the dust upon the ground, then he could count your descendants." I believe that this scripture does hold true.

Because the whole earth has indeed benefited and been greatly influenced from the powerful traditions and thought that have reverberated from Israel throughout history. Since the days of the Covenant that was made with Abraham in the desert, we have all become great inheritors of this tradition.

With an inheritance that is as countless as the dust of the earth. Many great and wonderful things have come out of Israel and its people and the world would just not be the same without it.