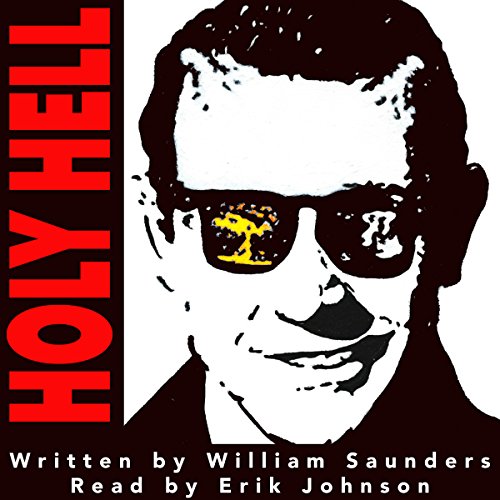 By: William Saunders
Narrated by: Erik Johnson
Try for $0.00

Lucifer, Prince of Darkness, is off to a rough start. He's been plucked from Hell and dropped onto a rural Georgia highway. Naked. In the rain. And he's about to be hit by a car. To make matters worse, Lucifer is being hunted by an agent of God who has the power to destroy him.

Barabbas is looking forward to the end of his journey. Gifted with immortality, he has spent 2,000 years searching for the fallen angels who waged war against Heaven. They've been sent to Earth from Hell one by one, and Barabbas offers them all the same deal: rejoin the Kingdom of Heaven or perish forever.

Now his final adversary has arrived, and the hunt becomes something he never expected when Lucifer reveals himself to the world and uses the age of information to his advantage.

Before Barabbas can face off against Lucifer, he'll have to handle the geriatric Horsemen of the Apocalypse, not to mention a zombie army. But with his vampire companion, Kate; a motley group of NSA agents led by a 14-year old girl; and the Three Wise People, Barabbas might just stand a chance.

What listeners say about Holy Hell

This book is nothing short but amazing!
I could not even put it down when I started it. I can't wait for another book by this author.

Usually, it takes a while for me to warm to a new writer. For me, you have to learn their cadence and rhythms before getting lost in the story. With William Saunder's "Holy Hell", I was almost immediately transported into a world of Demons, Angels, Vampires and Immortals. This optimistic story of the apocalypse is lined with a cynics humor. Similar to another great genre writer Christopher Moore, William Saunders deftly weaves humor into a complex (and sometimes very dark) fiction that spans locales from the Deep South to Antarctica. The characters have a realized humanity and distinctive personalities that make their journey a delight to read. If you're on the fence about trying out a new writer, might I suggest the audio adaption as Erik Johnson adds a nuanced performance on top of a tight piece of literature. Either way, you're in for a treat. Highly recommended. Full stars and honors.

I really enjoyed this supernatural adventure

So is this my final word? The book does not suck? Nah I can do better than that. It was campy. It was apocalyptic. There was ass kicking. There were vampires. There were angels and demons, and the devil himself. And it wasn't even set it Georgia,

There were many characters in this book and the narrator, Erik Johnson, handled all with aplomb. Kate, one of the main characters, had a definite F-You attitude and the narrator did her so well that she became my favorite.

I won't spoil the ending for you, but Jesus died.

God always did have some strange plans

Heaven and hell on earth. Battles of biblical proportion. Demons walk the earth for a chance of redemption or eternal death. Characters from the Bible, descendants, powers of the
Ancients and much more. Great story well narrated. Thoroughly enjoyed it. I was voluntarily provided this free review copy audiobook by the author, narrator, or publisher.

A Modern Take on Armageddon

Would you listen to Holy Hell again? Why?

Yes, I'll probably listen again because the apocalypse is handled in such a unique and fresh way. (Now, those are words I never thought I'd type!)

This is the Apocalypse, right? Armageddon, the final battle, is close. War, Famine, Pestilence, and Death are wrecking havoc. Yest, there's always that bit of sly humor that pops up when you least expect it. For example, Lucifer can look like anyone/anything he chooses. Gregory Peck? Check. Sean Connery? Check. He goes public, demonstrating his powers on TV, using the media to spread his message. People follow him on Facebook, Twitter, etc. Everyone assumes they're seeing gimmicks and illusions. Very few see him for what he is...until it's too late.

What does Erik Johnson bring to the story that you wouldn’t experience if you just read the book?

The characters really came to life for me.

I came really close, but I did have to get a few hours sleep.

I was voluntarily provided this free review copy audio book by the author, narrator, or publisher.

There are a whole list of things I could say about this book. The bottom line is it's a really fun, humorous, entertaining and enjoyable end of days story. This book is a fantastic way to pass the hours on a road trip, it made the time fly. The story will keep you laughing out loud or smiling continually.

A great cast of characters including but not limited to Lucifer, vampires , cherubs, rogue angels, zombies and more with plenty of action, twists and intrigue to keep the story moving at a nice fast pace. Never a dull moment.

Great narration. Erik Johnson did a great job with the narration. Nice voice, easy to listen to for hours at a time. Clearly spoken. Nice even pace. Really good character voices. Even his female character voices are good. He was able to bring the characters, their humor, sarcasm and the story to life. I would definitely listen to more books he narrates. Very entertaining and enjoyable.

The Devil, Demons and Angels - Oh My

I wasn't sure about this story at the beginning chapters. But when the character list was added to the story made me want to listen to more.

Holy Hell tells of the dark characters in the Bible and expands on them in a unique and hilarious way. Barabbas and Kate were my favorites. I thought it might end up being a series, however it did end so well there is no need for another chapter.

Erik Johnson is a perfect Lucifer and all the others in this tale.

If you enjoy sometimes dark and quirky humor you will enjoy this story.

This book was given to me by the author, narrator or publisher for free in exchange for an unbiased review.

I received this book free of charge for an honest review, cool story, wish there would have been a little more of an after the fact but over all loved it. I'm proud to admit that I would have ended up being one of lucifer's fans. he turned out to be a great character

This was a different End Of Days story and I liked the author's ability to skillfully weave the characters together with the power of belief. Well done.

Happy ending (depending on who you rooted for) and appreciated the contemporary setting and attitudes.

I would recommend this to those who have deeply held Christian beliefs and behaviors.