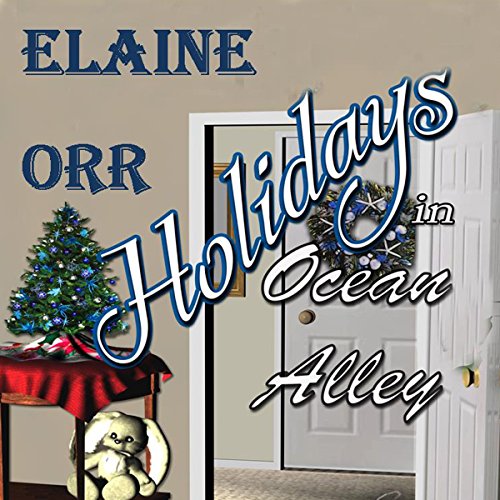 Holidays in Ocean Alley: Special to the Jolie Gentil Series

By: Elaine L. Orr
Narrated by: Christopher Bateson
Try for $0.00

Opening your apartment door to see a woman sliding down it is distressing. Especially when that woman has a knife in her chest. How could a murderer be roaming the halls in the middle of the night? After all the times she has encouraged Jolie to mind her own business, Aunt Madge has had a change of heart.

It's Jolie's boyfriend Scoobie Madge turns to help her figure out who the murderer is. Not that being temporarily in an assisted living apartment prevents Aunt Madge from investigating herself. No, a fall from a stool that results in a broken wrist and ankle can't hold down the owner of the Cozy Corner B&B.

Could the murderer be a resident with a grudge, or a philandering neighbor who didn't want to get caught in someone else's bed? Aunt Madge's scooter rides take her to the laundry room where she thinks she spots a body in a bin, and into the cold to check exit doors to be sure they can't be entries for murder. All she gets is a reputation for being nosy. It's hard not to be when a dead woman's blood is on your carpet.

Murder's not all Madge and friends juggle. What will happen to the Alzheimer's patient whose husband wants to keep her in their apartment? Will Scoobie find information about Melvin, his ornery former professor, that will explain his odd behavior? And how will Madge and her good friend Lance avoid the acid-tongued Elmira Washington, who has decided she wants an apartment in their building? Elmira has been a thorn in Jolie's side for years. Would she be willing to kill to eliminate a roadblock to her move?

For a change, it's Madge whose persistence annoys Sergeant Morehouse of the Ocean Alley Police. He tells her she is moving up on his pain-in-the-ass list. Certainly the director of the Silver Times senior complex wants Aunt Madge to get well enough to leave. And she does miss her exuberant retrievers and husband Harry. He's busy burning muffins at the B&B instead of helping Jolie with the appraisal bus.

What listeners say about Holidays in Ocean Alley: Special to the Jolie Gentil Series

hard to tell which character is speaking

I have really enjoyed this series and even though the narrator changes from book to book I normally have not had any trouble telling which character is speaking. I'm not sure if the author changed how they were doing it or it's just the narration but I had a very difficult time this time with this narrator telling who was speaking whose point of view it was. this made the story difficult for me to follow although the narrator did use good levels of tone and in general was a good narrator just not for this book.