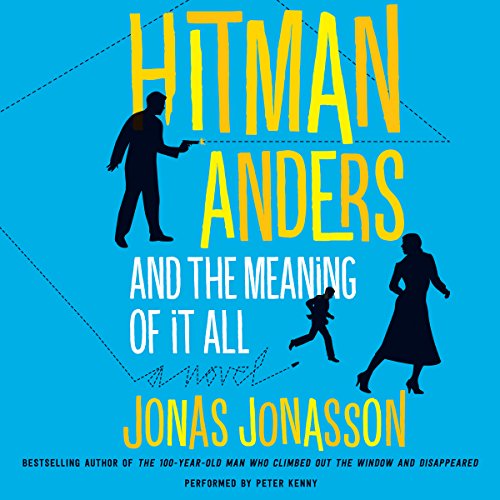 Hitman Anders and the Meaning of It All

By: Jonas Jonasson
Narrated by: Peter Kenny
Try for $0.00

From the author of the international best seller The 100-Year-Old Man Who Climbed Out the Window and Disappeared, a brilliant satirical novel set in modern Sweden - a story of idealism and fanaticism, gangsters and entrepreneurs, sensationalism and spirituality, that explores the values that matter in contemporary life.

In a former brothel turned low-rent hotel, the lives of three unusual strangers - a former female priest, recently fired from her church; the ruined grandson of an ex-millionaire working as a receptionist; and Killer-Anders, a murderer newly released from prison - accidentally collide, with darkly hilarious results.

Seeing a lucrative opportunity in Killer-Anders, the unlikely trio form an unusual new business. The Priest and The Receptionist will handle strategy and public relations and coordinate Killer-Anders' "missions". Using the media's obsessive need for sensational, headline-making stories to advertise their talent's superb "skill", they quickly build a clientele of rich Swedish gangsters. Suddenly they're making an altogether different kind of killing of their own.

But when Killer-Anders begins asking deeper questions about purpose and meaning, his curiosity leads him to an unexpected discovery: He finds Jesus. Desperate to save the money machine they've built, The Priest and The Receptionist devise an audacious plan utilizing Killer-Anders' newfound and decidedly fervent faith.

Mischievous yet bighearted, filled with Jonas Jonasson's trenchant humor and delightful twists, Hitman Anders and the Meaning of It All is a delightful comic adventure that reminds us it's never too late to start over - and to discover what truly matters.

not his best work. after The Girl Who Saved the King of Sweden, and The 100 Year Old Man... this was a bit of a disappointment.

Not as good as the author's other books

I was a little disappointed with this book. the author's other books have been some of my favorites, but the storyline of this book was not nearly as good.

This was my least favorite of Jonasson’s books. The story was alright but I had to push through it a bit.

Loved the others. Just couldn’t get into this one.

The 100-year Old Man was wonderful, and the Girl Who Saved the King is so far my favorite. Hitman just didn’t grab my attention as much. Absolutely top-notch narration, however. Peter Kenny is superb.

extremely enjoyable listen! I loved the narrator and the story was humorous, enjoyable and original.

i enjoyed reading the book more than listening to it, but good all the same.

Peter Kenny could make any book enjoyable, even if this one didn't need his help. it's a pleasant and entertaining story with interesting an unique characters, brought to life by the narrator's excellent talent.

A good story that made me laugh. Hosanna and Hallelujah. Hitman was my favorite character.

A different kind of story

Not my typical reading style or storyline. It was different, interesting and entertaining; an easy read.