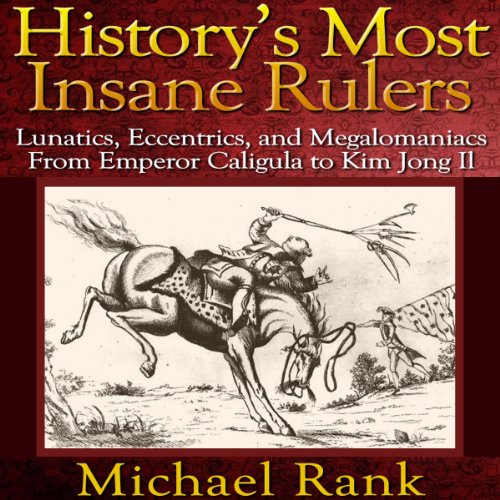 By: Michael Rank
Narrated by: Kevin Pierce
Try for $0.00

Few mixtures are as toxic as absolute power and insanity. When nothing stands between a leader's delusion whims and seeing them carried them out, all sorts of bizarre outcomes are possible.

Whether it is Ottoman Sultan Ibrahim I practicing archery on palace servants and sending out his advisers to find the fattest woman in the empire for his wife or Turkmenistan President Turkmenbashi renaming the days of the week after himself and constructing an 80-foot golden statue that revolves to face the sun, crazed leaders have plagued society for millenia.

This audiobook will look at the lives of the ten most mentally unbalanced figures in history. Some suffered from genetic disorders that led to schizophrenia, such as French King Charles VI, who thought he was made of glass. Others believed themselves to be God's representatives on earth and wrote religious writings that they guaranteed to the reader would get them into heaven, even if they were barely literate.

Whatever their background, these rulers show that dynastic politics made sure that a rightful heir always got on the throne - despite that heir's mental condition - and that power can destroy a mind worse than any mental illness.

What listeners say about History's Most Insane Rulers

I enjoyed this. It reminded that democracy is important even with all of its flaws.

Great book. Simple to understand. Worth the listen. I only wish that they would do into more detail regarding the each of the people reviewed in the book.

I enjoyed this book. It had just enough information for me to learn about different rulerships. Amazing and crazy how some are put into leadership

I should have expected it from the book's description and length, but this is a rather silly and ill-informed disconnected set of chapters. Spend your money elsewhere.