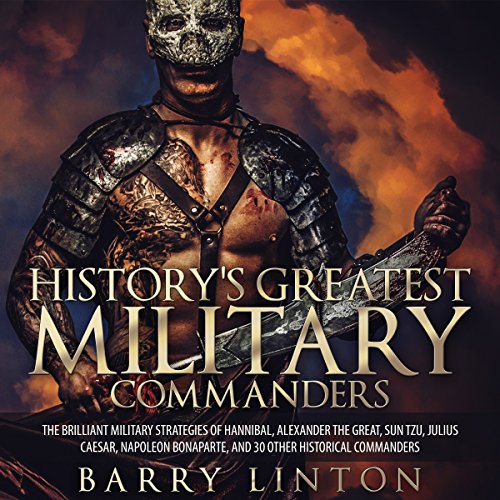 Armed conflict has produced many of the great leaders in human history. Some fought purely for glory, others waged war out of desperation, and even more were driven by a sense of duty. Every leader has human qualities that transcend time and culture. The lessons taught, tactics used, and losses suffered stand as a testament to their lives and accomplishments. In his book, entitled History's Greatest Military Commanders, author Barry Linton covers these leaders and great military commanders in fascinating detail, highlighting their distinguishable backgrounds and origins. Many were conquerors, some were innovators, and even others were liberators. One trait shared by all of these leaders is the willingness to adapt and overcome. This book presents the true stories and struggles faced by these Commanders.

Detailed battlefield plans are outlined, giving a step by step account of many important battles as well as information describing the context of each battle. The Commanders featured are drawn from all major periods of human history. Their achievements as well as their failures are highlighted, combined with the impact they had on the greater world and history.

The reader has a terrible lisp making it impossible to not be distracted by the constant whistling noise.

Take the coolest historical badasses and tell their stories as quickly as possible. The audio performance made this almost unbearable to finish. Lurching, clunky, and dry story telling would have put me to sleep if it wasn't so infuriating.

OMFG! I CANT STAND IT!

The story is good if you can ignore the whistling sounds the narrator makes every S Sound.
i cannot and couldnt pay attention to what was being said. i quit somewhere in chapter 3.
it was driving me ibsaine and I could only hear his whistling sounds which are louder than his reading.
i imagine it's a good book but just get someone else to read it!

The narrator is boring and has a speech defect, a whistle on sibilants. Some of the actual facts are wrong too.

good little history lesson of multiple generals from all times and nationalities, goes into details of key battles and is completely subjective. reader is a tad whistly