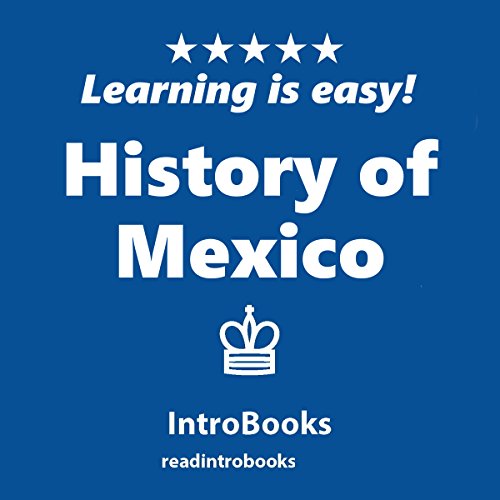 Unlike the USA, the history of Mexico dates back to well within 1900 years or so. The discovery of Mexico was a coincidence. Again, the Spaniards were the first to discover Mexico, too. The French and Spanish armies tried to invade Mexico and the neighboring parts of North America. The Mexican Revolution that followed the American Revolution brought in total peace and Mexico gained total liberty from the foreign imperialistic measures. Soon broke out the war between the neighbors which did not last for long.

Terms and pacts brought in peace in the borders after a mutual agreement made with the USA. Today, Mexico is one of the most competent nations of the world, with massive natural resources and technological growth and development in the 21st century.

Would you try another book from IntroBooks and/or Andrea Giordani?

This is a perfectly horrible book. It is a Maxist screed masquerading as 'history'. The composition is like a bad translation of Spanish and the reader a complete amateur. It focuses on banal generalizations. You learn NOTHING of use about Mexico. Do not waste your money and listening time!

Has History of Mexico turned you off from other books in this genre?

NO--just any book by this person or read by this reader.

Would you be willing to try another one of Andrea Giordani’s performances?

Absolutely NOT. It is read horribly.

Anger. I wanted a brief intro to Mexico and instead I got random thoughts, bad quotations, and poor reading.

Please, please remove this book from Audible. It is a disgrace.