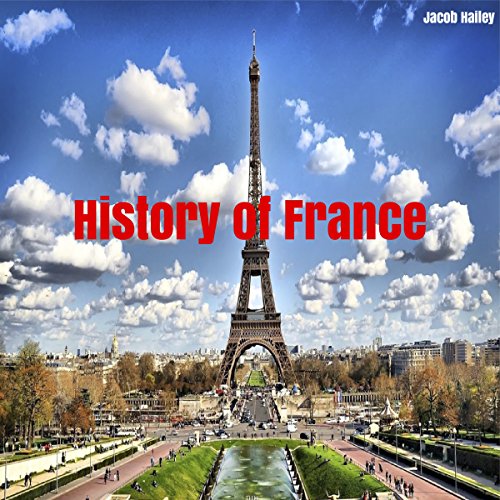 By: Jacob Hailey
Narrated by: Andrew Winford
Try for $0.00

The first written records for the history of France appear in the Iron Age. What is now France made up the bulk of the region known to the Romans as Gaul. Roman writers noted the presence of three main ethno-linguistic groups in the area: the Gauls, the Aquitani, and the Belgae. The Gauls, the largest and best attested group, were Celtic people speaking what is known as the Gaulish language.

Over the course of the 1st millennium BC the Greeks, Romans, and Carthaginians established colonies on the Mediterranean coast and the offshore islands. The Roman Republic annexed southern Gaul as the province of Gallia Narbonensis in the late 2nd century BC, and Roman forces under Julius Caesar conquered the rest of Gaul in the Gallic Wars of 58-51 BC. Afterwards a Gallo-Roman culture emerged and Gaul was increasingly integrated into the Roman Empire.

In the later stages of the Roman Empire, Gaul was subject to barbarian raids and migration, most importantly by the Germanic Franks. The Frankish king Clovis I united most of Gaul under his rule in the late 5th century, setting the stage for Frankish dominance in the region for hundreds of years. Frankish power reached its fullest extent under Charlemagne. The medieval Kingdom of France emerged from the western part of Charlemagne's Carolingian Empire, known as West Francia, and achieved increasing prominence under the rule of the House of Capet, founded by Hugh Capet in 987.

A succession crisis following the death of the last direct Capetian monarch in 1328 led to the series of conflicts known as the Hundred Years' War between the House of Valois and the House of Plantagenet. The war formally began in 1337 following Philip VI's attempt to seize the Duchy of Aquitaine from its hereditary holder, Edward III of England, the Plantagenet claimant to the French throne.

What listeners say about History of France