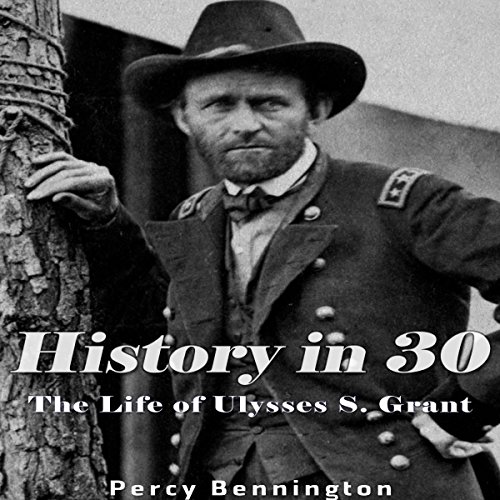 History in 30: The Life of Ulysses S. Grant

History in 30: The Life of Ulysses S. Grant

When one thinks of true American heroes, many names come to mind. American schoolchildren are quickly taught about George Washington, Abraham Lincoln, Ben Franklin, Thomas Jefferson, and a number of other important figures through the ages of American history. But one often overlooked president held the fate of the entire North American continent in his hands.

In the 19th century, one of the surest ways to rise to prominence in American society was to be a war hero, like Andrew Jackson and William Henry Harrison. But few would have predicted such a destiny for Hiram Ulysses Grant, who had been a career soldier with little experience in combat and a failed businessman when the Civil War broke out in 1861.

However, while all eyes were fixed on the Eastern theater at places like Manassas, Richmond, the Shenandoah Valley and Antietam, Grant went about a steady rise up the ranks through a series of successes in the West. His victory at Fort Donelson, in which his terms to the doomed Confederate garrison earned him the nickname "Unconditional Surrender" Grant, could be considered the first major Union victory of the war, and Grant's fame and rank only grew after that at battlefields like Shiloh and Vicksburg. Along the way, Grant nearly fell prey to military politics and the belief that he was at fault for the near defeat at Shiloh, but President Lincoln famously defended him, remarking, "I can't spare this man. He fights." Lincoln's steadfastness ensured that Grant's victories out West continued to pile up.

Despite being the best known Union general of the Civil War and a former president of the United States, Grant was penniless after being swindled by a fraudulent business deal when he learned that he had terminal cancer in the mid-1880s. Facing death, and with his family suffering financial difficulties, Grant set about writing personal memoirs that would not only secure his legacy but also provide for his family. Grant finished his memoirs just a few days before his death, but he wrote what is almost universally considered to be the best memoirs of the Civil War and one of the best personal memoirs ever written. Grant's memoirs, published by Mark Twain, sold over 300,000 copies, earning the Grant family over $450,000.

Although Grant was instrumental in winning the war and eventually parlayed his fame into two terms in the White House, his legacy and accomplishments are still the subjects of heavy debate today. His presidency is remembered mostly due to rampant fraud within his Administration, although he was never personally accused of wrongdoing, and even his victories in the Civil War have been countered by charges that he was a butcher. That said, without Ulysses S. Grant, it's possible the Confederacy may have won the Civil War.

History in 30: The Life of Ulysses S. Grant provides a quick but comprehensive look at the life of the 18th president.