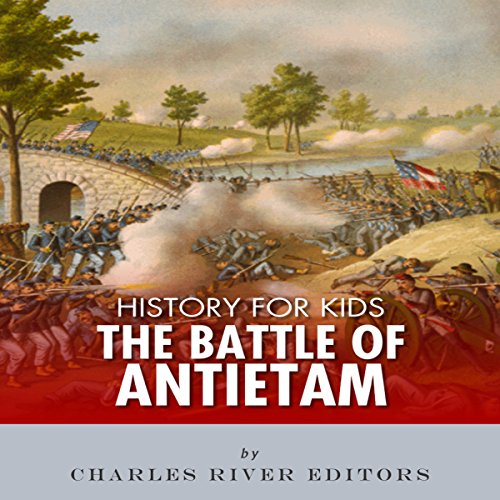 History for Kids: The Battle of Antietam

History for Kids: The Battle of Antietam

"Those in whose judgment I rely tell me that I fought the battle splendidly and that it was a masterpiece of art. ...I feel I have done all that can be asked in twice saving the country. ...I feel some little pride in having, with a beaten & demoralized army, defeated Lee so utterly." (George McClellan)

In Charles River Editors' History for Kids series, your children can learn about history's most important people and events in an easy, entertaining, and educational way. The concise but comprehensive book will keep your kids' attention all the way to the end.

The bloodiest day in American history took place on the 75th anniversary of the signing of the Constitution. On September 17, 1862, Robert E. Lee's Confederate Army of Northern Virginia fought George McClellan's Union Army of the Potomac outside Sharpsburg along Antietam Creek. That day, nearly 25,000 would become casualties, and Lee's army would barely survive fighting the much bigger Northern army.

The fighting that morning started with savage fighting on the Confederate left flank near Dunker church, in a corn field and forests. The Confederates barely held the field in the north sector, but even still, Lee's army may have been saved by the Northern army's inability to cross the creek near "Burnside's Bridge". Ambrose Burnside had been given command of the "Right Wing" of the Army of the Potomac (the I Corps and IX Corps) at the start of the Maryland Campaign for the Battle of South Mountain, but McClellan separated the two corps at the Battle of Antietam, placing them on opposite ends of the Union battle line. However, Burnside continued to act as though he was a wing commander instead of a corps commander, so instead of ordering the IX corps, he funneled orders through General Jacob D. Cox. This poor organization contributed to the corps's hours-long delay in attacking and crossing what is now called "Burnside's Bridge" on the right flank of the Confederate line.

The delay allowed General A.P. Hill's Confederate division to reach the battlefield from Harpers Ferry in time to save Lee's right flank that afternoon. Fearing that his army was badly bloodied and figuring Lee had many more men than he did, McClellan refused to commit his reserves to continue the attacks. The day ended in a tactical stalemate.

Although the battle was tactically a draw, it resulted in forcing Lee's army out of Maryland and back into Virginia, making it a strategic victory for the North and an opportune time for President Abraham Lincoln to issue the Emancipation Proclamation, freeing all slaves in the rebellious states.

History for Kids: The Battle of Antietam comprehensively covers the fighting, analyzes the decisions made by the battle's most important leaders, and explains the aftermath of the battle and the legacies that were made and tarnished by the battle.