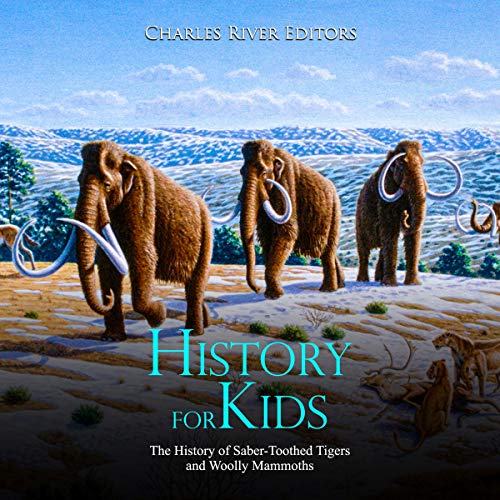 By: Charles River Editors
Narrated by: Daniel Houle
Free with a 30-day trial

Imagine a feline with the spirit of a lion, the sneakiness of a puma, the terrifying walk of a black bear, and the strong arms of a gorilla. Sounds cool? Now, add some huge dagger-like fangs. Even cooler, right? This amazing creature was best known as the saber-toothed tiger, an animal so fearless, it could beat beasts even twice their size!

As cool as he sounds, this Ice Age feline earned quite a villainous reputation. You can even see them be the bad guys in movies! Ever watched the movie Ice Age? All saber-toothed tigers, except Diego, seemed to be dangerous. Or, do you remember Wolverine’s enemy Victor Creed “Sabertooth”? Yes, he was scary.

Beyond its reputation, the saber-toothed tiger is an Ice Age celebrity, and so is the woolly mammoth. In September 2012, on a chilly morning, a Russian kid named Yevgeny Zhenya and his dogs were walking to school, when an awful smell made them stop.

The 11-year-old wanted to find out what smelled so bad, and with the help of his furry friends, he went to explore the land. They stumbled upon a giant pair of heels that were covered in an immense pile of snow! What could such a giant thing be?

The creature he found turned out to be a 16-year-old mammoth whose body had remained whole for over 30,000 years! Since 1901, no one had made such an important find, making this discovery quite special; they even named the creature after the little boy who found him!

After dinosaurs, few vanished animals are as famous as the woolly mammoths, or in 18th-century scientist George Cuvier’s words, "some kind of extinct elephant". Raise your hand and keep listening if you are ready to learn more about the story, fossils, and facts about these amazing animals!

What listeners say about History for Kids