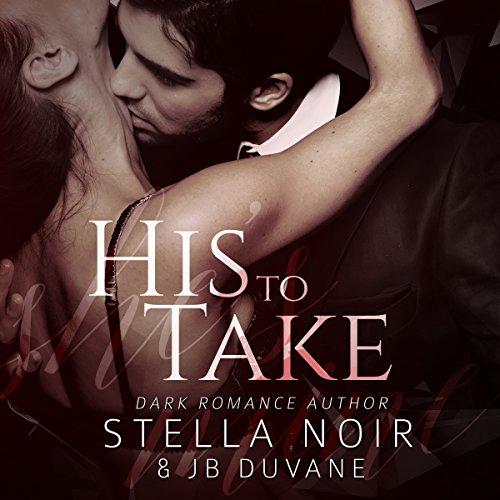 By: Stella Noir,JB Duvane
Narrated by: Sarah Ravenwood
Try for $0.00

Adrian was my first love.

The boy I'd always compared all the others to.

But now he's a man and he's holding me captive.

I'd heard the stories for years but I didn't believe them.

My Adrian couldn't have done the things they say he did to all the other girls.

But now that I'm with him I see that it's true.

I know he's a monster...and I'm terrified of him.

But I'm also terrified of the feelings I still have for him...and what those feelings mean about me.

Brooklyn was the only one who ever saw my true self.

But that was seven years ago...and it might as well have been a dream.

I had to leave her behind. It was the only way I could protect her from the truth about my family and our business.

But now a debt must be paid and she's been brought here.

And my father has ordered me to break her...to ruin her.

If I follow his orders it will destroy me.

His to Take is the first part in a series with a HFN ending. Although there is some closure with the main characters, there are also many unanswered questions that will ultimately be revealed.

This book includes dark sexual themes of an adult nature that may not be suitable for some, and is not appropriate for anyone under the age of 18.

For a limited time His to Take includes the dark romance novel Colin: A Serial Killer Romance.

What listeners say about His to Take

dont waste your money... not worth the $11.00.. maybe...maybe this would have been worth the read/listen if it had been "included " with membership. but dont spend ur extra points or dollars on this one.

Would you consider the audio edition of His to Take to be better than the print version?

I loved Adrian. I always love when a sexy, hot alpha male protects the woman he loves. Adrian was all that and more.

She had a engaging voice that kept my interest.

I loved the entire book, and listening to it was a different but enjoyable experience.

This story will grab you and not let you go till your done. I loved
the story, I loved the characters, I loved the suspense, I loved
everything about it. Ms. Ravenwood does a wonderful job bringing
this story to life. I really enjoyed her voice. Highly recommend to all.

"This book was given to me for free at my request and I provided this voluntary review."
This story is captivating. Brooklin and Aiden have a long way to go. It's dark, it's hot and full of emotion. I loved this book!

Would you listen to His to Take again? Why?

Yes i would. Its an easy story to listen to.

That its something thats going on in theworld that no one really knows about. First love between two people

Yes, it kept me hooked while i did my ironing it made the task so much quicker. Ive gone on to read the rest of the book series and loved it.

This book is the first in a series that you must read to find out if Adrain can keep Brooklyn safe.