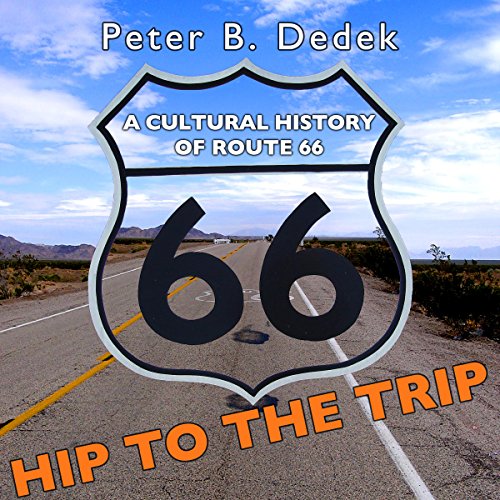 Hip to the Trip

By: Peter B. Dedek
Narrated by: Michael Rene Zuzel
Try for $0.00

Before and since its official closure in 1985, historic US 66 became associated with the deserts, Indians, and cowboys of the Southwest; the "Okies" of the Great Depression; and the millions of vacationers who took to the highway in their streamlined automobiles and found adventure on the open road from the late 1940s to the 1970s. Route 66 has such name recognition that in the past 20 years it has been used to advertise products ranging from blue jeans, to root beer, to automobiles.

The highway enjoyed only about 30 years of dominance as a primary auto and truck route from 1926 to around 1956. Gradually replaced by interstates into the 1980s, Route 66 became forever fixed in the history and lore of the Southwest and the United States. Route 66 provides a unique vantage point from which to better understand American popular culture from the 1920s to the present.

The purpose of this audiobook is not to simply recount the history of Route 66, but to create a comprehensive portrait of the cultural meaning of the highway. What was Route 66 at its pinnacle, what is it today, and what might it become in the future?

"An extraordinary work that combines solid scholarship with sound analysis.... Anyone planning to take a nostalgic trip to the old highway should listen to this book before leaving home." ( Journal of Arizona History)
"Highly recommended for all collections." ( Library Journal)
"A concise, thought-provoking study of why Route 66 captures Americans' imagination and loyalty." ( Montana the Magazine of Western History) )

What listeners say about Hip to the Trip

Dedek explores the common and uncommon aspects to the history of Route 66. The first part of the book covers the chronology and dives into the national need for well-maintained highways. This concludes with the official closing of the road and then a cultural investigation begins. Route 66 has featured in several well-known works, such as The Grapes of Wrath by Steinbeck. Yet Dedek doesn’t stop there. He touches on the negative sides of the times, such as prejudice and lack of equal rights for women; Route 66 is a part of that history.

I learned quite a bit about Route 66 from this book. Quite frankly, I was stunned to hear that the route was officially closed as I have driven on parts of Route 66 many times. Through this book, I learned how the major interstates replaced such roads in commerce. Hence, much of 66 is officially closed and abandoned, no longer maintained. Here in NM, chunks of it are still alive and thriving (hence my ignorance on the matter). Also, I was unaware that 66 had stretched so far east. Truly, I just thought it was a desert Southwest thing. Yet when I reflect on all the TV, movies, books, music that reference 66, so much of those references are set in the desert Southwest.

As the automobile rose in popularity and families started taking meandering holidays, transportation by railroad declined. Route 66 had a hand in that, making much of the west accessible. With all these tourists came a change in advertising, hotels, diners, and cultural attractions. The native cultures of the desert Southwest were definitely encouraged to modify their wears to make them more attractive to tourists. Plus there were the little roadside acts, like cowboys versus Indians trick riding shows. Many Route 66 buildings added facades to their street side face that made them more attractive to tourists. I’m sure whole books have been written on the architecture of Route 66.

Dedek includes a section on the nostalgia of Route 66, the various preservation organizations, the fan clubs, etc. Coupled with that he includes a short section on how the freedom of Route 66 was not for everyone. For much of the history of 66, hotels and diners would not cater to non-Whites. It was also highly unusual for unaccompanied women to travel the route. I really appreciate that Dedek makes this nod to reality instead of clinging to the fantasy of the perfect road trip. He also went to the trouble to dig up postcards from the ‘good old times’ that travelers mailed home back east. Not everyone was taken with the charms of the desert Southwest. All around, this is a pretty comprehensive history of Route 66 that refuses to turn a blind eye to certain realities.

I received this audiobook from the narrator (via the Audiobook Blast Newsletter) at no cost in exchange for an honest review.

The Narration: Michael Rene Zuzel did a pretty good job. He sounded interested in the subject and seemed to enjoy narrating the book. His pacing was good, not rushing the listener along. There were a few times he pronounced a local word (like ‘kachina’) oddly and I had to stop a moment to figure out what he meant. I am sure some regional dialect uses his pronunciation, just not mine. These instances were few & far between.

One of the most iconic and popular roads in the United States, Route 66 connotes images of the old west where one can see places such as the pueblos in New Mexico to the Grand Canyon in Arizona. It was the original migration road to California for stagecoaches and railroads and in its heyday used Native American, Cowboy, and Mexican stereotypes to attract travelers to the “Land of Enchantment.” It depicts the essence of America.

When I think of Route 66, my mind naturally gravitates to the tune of “(Get Your Kicks) on Route 66″ which was written by Bobby Troup and his wife Cynthia and recorded by Nat King Cole along with many other artists including Chuck Berry and the Rolling Stones.

From the 1920’s to 70’s, migrants going to California gave Route 66 is popularity. It was originally a stagecoach route until the railroad saw it as an opportunity to offer a more luxurious trip and began a rail line traveling west where people could visit tourist towns and Spanish villages. Throughout the years there’s been games, television shows, songs, magazines, graphic signs, and postcards that have helped bring the route into American pop culture. There were books written, such as Jack D. Rittenhouse’s book “A Guidebook to Route 66″ that included maps and illustrations featuring regional themes such as tourist attractions, gas stations, and souvenir shops. John Steinbeck introduced it into “The Grapes of Wrath” and called it America’s Main Street.

It’s also been known as the Mother Road and the Will Rogers Highway and sadly Route 66 was formally decommissioned by the Federal Government in 1985. “Hip to the Trip” written by Peter B. Dedek is the comprehensive bible of the history of one of the most famous and popular roads in America. I would highly recommend listening to this audiobook especially if you want to take a nostalgic trip back in time to its early days.

Michael Rene Zuzel did a stellar job narrating this book. I’ve listened to his work before and he always delivers. He has perfect clarity in his voice which adds a bonus to listening rather than reading this book. He’s truly an asset for audiobook publishers as well as listeners. His pronunciation is spot on which is a big plus for me and he has a good vocal tone. He’s consistent and that’s what I like about his reading. Great work!

i read it and it was good.

Whenever I open this app, it asks me to write something about this book. so here you go.

This is an audio book that shows us the Route in all its many aspects: good, bad and the normal. It avoids the path of commercial books, most of the ones out since 1990, that promote the Route in terms of commerce .It features a broad history of the Route and includes that along with the other elements.Good book.