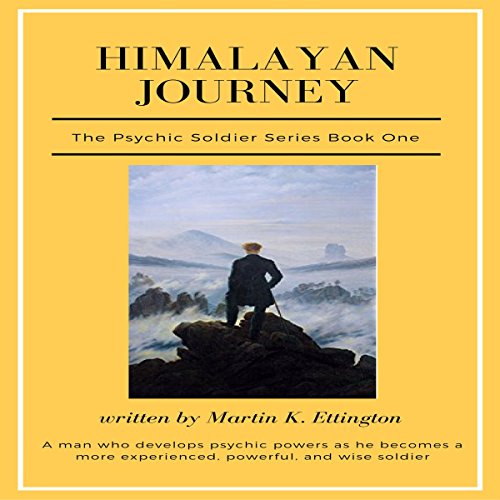 Welcome to this new series about Tristin Morgan the Psychic Soldier and his exciting adventures growing up in the 19th century. He learns to fight as a soldier and acquires real psychic abilities to help him in his fights.

These abilities are real, and the author has written extensively about spiritual and psychic development, since he is a worldwide authority on these subjects. (See his nonfiction books such as God Like Powers & Abilities to learn more.)

In book one, Himalayan Journey, Tristin is spending a couple of years at the School of the Gods in the Himalayas. During a break between terms, Tristin decides to track down an enlightened Master who is over 400 years old.

During this trip, he has several exciting adventures and learns amazing things from Master Bapaphil. In future books, we learn Tristin's history as he fights in wars throughout history and eventually protects the Earth from alien invasion.

Story moves steadily and is a good introduction to this author's character. While there were a few twists, I did find it somewhat predictable but was a well-written book with excellent character development that will be very useful for the reader to know in the future series.

I recommend this book

This is a well-written book full of fully fleshed-out characters. I'll be reading more by this author.

I really enjoyed this story for many reasons. The characters were believable. They were smart, and logically figured things out. Friends stayed true to their family and friends. The plot was good.

All I can say about this book is that if it's not really a true story, then it's the best fiction I've ever read.

Martin is a good writer and is very entertaining. The fact of his adventures are somewhat suspect, but the meat of it is very exciting.

A gripping book that I could not put down, Martin, however, seems to be fighting his power and breaking top secret rules.

Mr. Martin left me feeling like I had been to war. Powerful experiences without much of a reason for them to have happened. A must-read, but a less abrupt ending would not have left such questions about the integrity of the contents of the book.

Martin tells his true life story with ease, honesty, and intrigue. It's a hard one to put down. It's full of credible journeys to places most of us will never get to see. Looking forward to the movie!

Fantastic audiobook- lessons for us all. Hope there is another book in the pipeline. I enjoyed it.

I give it 5 stars

An interesting read though and would recommend to others with an interest in psychic phenomena.

While the implications of this novel are far-reaching, the plot and storyline are convincing enough to make it at least a quality work of science fiction.

I found this book by Martin K Ettington very interesting. I would love to try to do remote viewing to see if I could do it and to see what I can really see.

This book is beyond amazing. It was hard to put down. It has been a long time since I have had a book that I felt compelled to read like this one. It opens one's eyes if they are ready.

This was an excellent audiobook by Martin. I'll admit that the writing style was fluid, and I think the book is intended to be a literary masterpiece.

If you believe in remote viewing, you will find this book interesting. Even if you're not truly a believer, the book still holds insight into the human condition.

Though it is not the easiest read-emotionally-and the author is not a gifted writer, it is from the heart.

Wow. This is fascinating. An unusual topic and a compelling and scarcely credible story. Recommended

This is a definite must-have, a truly amazing story about the psychic soldier. This book gave me all the feels. It has everything that makes a great story.

I fell in love with these very appealing characters, due in large part to the author's writing style, which flowed with earnest charm. I could not put it down and am sad to leave these characters behind. Highly recommended audioboook! I'm going to look for more of his books.

This is an interesting story and I will read more books by this author and will recommend this one to my friends.