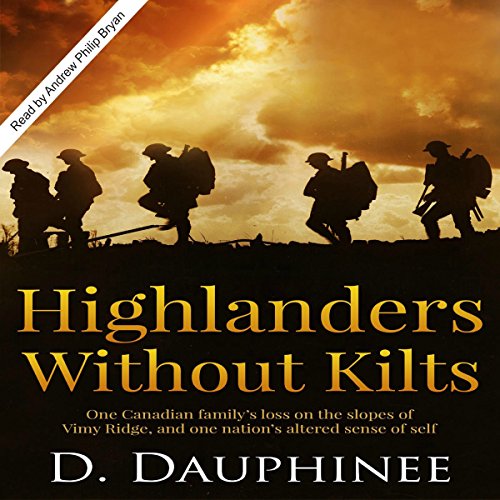 By: D. Dauphinee
Narrated by: Andrew Philip Bryan
Try for $0.00

Highlanders Without Kilts is a story of love, war, uncommon disaster, and triumph. In 1917, the world was embroiled in a terrible war, the likes of which had never been seen nor imagined. Canada, still a dominion of Great Britain, was early in the fight and sent seven-and-a-half percent of its population to fight for King and Country, ultimately contributing a force of more than 600,000 soldiers, nurses and chaplains. In April of that year, the entire Canadian Expeditionary Force, fighting together for the first time, battled their way to the top of Vimy Ridge in northern France. In December, the city of Halifax was rocked by a devastating accidental explosion that caused 9,000 casualties. Highlanders Without Kilts is the story of one Nova Scotia battalion's odyssey, and one family's dreadful loss. From the unspeakable death and destruction came a nation's altered sense of self and a newborn path to its future.

What listeners say about Highlanders Without Kilts

Mixes a captivating personal story, local Canadian lore and portion of tragic WWI history( largely forgotten) in a way that pulls you along. Storytelling at its best.

Would you listen to Highlanders Without Kilts again? Why?

Yes. Enjoyable and would like to read the details to get them straight.

None in particular. All the Canadian soldiers were brave and accepted their patriotic duty.

Which character – as performed by Andrew Philip Bryan – was your favorite?

All of them. Excellent performance

No. But was quite informative.

Makes a nice contribution to other audios of WW1.

What made the experience of listening to Highlanders Without Kilts the most enjoyable?

The history was intertwined with a dramatic story that kept me hanging on every word.

What was one of the most memorable moments of Highlanders Without Kilts?

The letters home from the soldiers were especially memorable.

What about Andrew Philip Bryan’s performance did you like?

He has a pleasant and clear voice and his English accent works well with the story.

There were many moments: Mr. Dauphinee describes the world war I trenches in a way that makes you feel you are there. There are several dramatic events (I won't ruin the story) that tear at your heartstrings.

A fantastic read. Mr. Dauphinee is a gifted historian and storyteller.