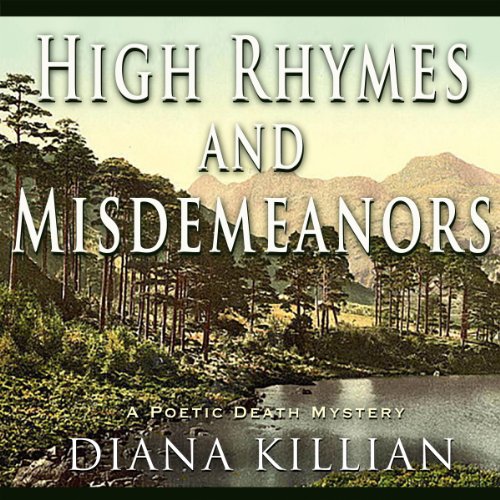 By: Diana Killian
Narrated by: Saskia Maarleveld
Try for $0.00

Can a love of dead poets save her from following in their footsteps?

While visiting her favorite poets' old haunts in England's Lake District, Grace Hollister, an American schoolteacher and literary scholar, stumbles upon the body of Peter Fox face down in a stream. Thankfully, the dashing local antiques dealer is not dead - but after saving his life Grace soon finds herself pursued by two menacing thugs who are after the gewgaws Peter is hiding. Problem is, Peter doesn't have any gewgaws. He doesn't even know what gewgaws are. But he and Grace soon discover they've got something to do with Lord Byron¨and someone's willing to kill for them.

As Peter's dark past is gradually revealed, his knowledge of vice coupled with Grace's love of verse lead them straight into the heart of a caper of the highest order - one that might lead to a spectacular literary discovery and poetic justice for all.

A Selection of the Mystery Guild

What listeners say about High Rhymes and Misdemeanors

I likes the premise: A mystery about an American woman studying the Romantic Poets in the Lake Country...it had all the makings of a great mashup of cultures with some history and intrigue thrown in. What I didn't like was how poorly the characters were developed. The protagonist was wimpy, weak, and shallow, much like her dashing hero. It had too much of the romance novel light, which I deplore, and little of the cozy mystery depth I was looking for.

Has High Rhymes and Misdemeanors turned you off from other books in this genre?

The plot and characters were shallow and poorly defined. Changing point of view between the two main characters was confusing and just not good writing. It lacked consistency, flow, and I often found myself saying out loud, "what? how did that just happen? That makes no sense?" The motives of the killer were laughable. And one of the sub plot angles of a missing work of Byron's was a great idea that could have saved this book, but was surreptitiously dropped.

Did Saskia Maarleveld do a good job differentiating all the characters? How?

The characters were differentiated, but not well defined.

Was High Rhymes and Misdemeanors worth the listening time?

It was informative for me of how not to write my great novel. The one I've been meaning to write for the last two decades. ;-)

Romantic and literary mystery-caper. Beautifully written and charmingly narrated. Not sure what more I can say. If you're in the mood for a relaxing and amusing read, this should do it.

I love a story with a strong female character. She didn't need saved by the hero, she saved herself. The romance was secondary, if that. It had a good mystery. Every time I thought I knew what was going on, it changed. I really enjoyed this book.

This was bad writing in so many ways. I couldn't figure out if it was a romance novel or a treasure hunt. I do know it was not a cozy mystery like Diana Killian's other books. I will nt be reading anymore in this series.