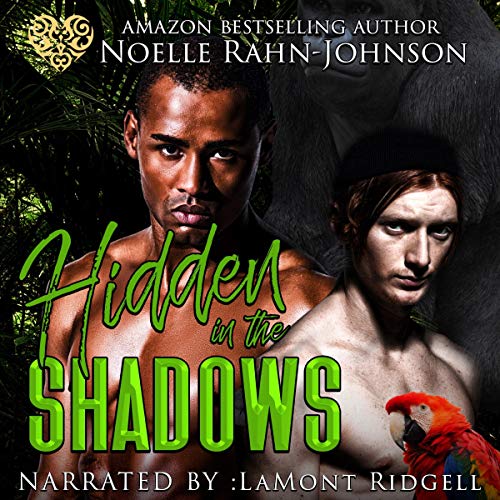 Hidden in the Shadows

By: Noelle Rahn-Johnson
Narrated by: LaMont Ridgell
Try for $0.00

Squatting on the forest floor, hidden behind and under the tall, thick ferns, Jamison watches as a red macaw flies and dodges trees, scrambling away from two other macaws chasing him. When the red bird miscalculates his turn, and flies head on into a tree, the other two birds squawk and fly away. Jamison lumbers over to where the injured bird lays. Seeing that the bird may be injured, he carefully picks it up with his huge, thick hands and cradles it into his massive chest. He brings it to his home to care of it until it heals.

When Sam wakes, he’s no longer in the forest trying to get away from the aggressive female and male shifters. But now he’s lying on a soft leather couch. In someone’s home. The female and her boyfriend wanted a three-some, but Sam’s not bi, he’s totally GAY! He knows he won’t have children the normal way, but adopting isn’t out of the question. Sam’s lived his adult life alone. His parents abandoned him when he came out to them as gay. And that didn’t sit well with their flighty and all-mighty life style. When Sam meets Jamison’s almost black eyes, attraction, heat and "mate" screeches through his brain. Sam’s a skinny white boy with flaming red hair.

Will this lumbering, muscular, dark chocolate skinned, shifter of a man want him? Could the hulking man want more than just him and a roll in the leaves? Will their animal shifter be accepting of each other? One flying and the other a chest pounding, beefy shifter?

What listeners say about Hidden in the Shadows

Hidden in the Shadows

I enjoyed this audio. It’s my first m/m book and the story between Jamison and Samuel was sweet. The narrator did a great job and kept me entertained.

This audiobook was great!! I was pulled in from the beginning and held until the end. It was unique and sexy. This was the first I have heard of this narrator, he was amazing!!! His sexy voice was exactly how I would imagine Jameson's voice, and he did the perfect voice for Samuel as well. This amazing book gets 5 stars from me!!