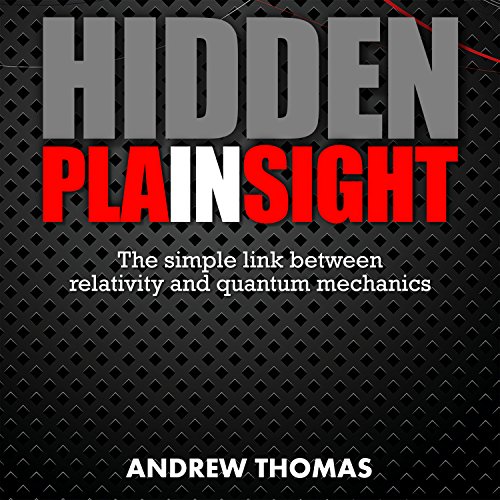 Hidden in Plain Sight: The Simple Link Between Relativity and Quantum Mechanics

By: Andrew Thomas
Narrated by: Tom Zingarelli
Try for $0.00

You never knew that theoretical physics could be so simple! In this exciting and significant audiobook, Andrew Thomas reveals how all unifications in physics have been based on incredibly simple ideas.

Using a logical approach, Thomas explains how the great 20th-century theories of relativity and quantum mechanics share a common base and how they can be linked using an idea so simple that anyone can understand it. An idea that is so simple it has been hidden in plain sight.

What listeners say about Hidden in Plain Sight: The Simple Link Between Relativity and Quantum Mechanics

Unfortunately this is not science and not philosophy, instead it is musings lightly disguised as science.

First the author DEFINES the universe of including all that is. Then defines “Absolute” as requiring something outside the system as a standard. He then concludes (basically by his own definition) that nothing in the universe can be absolute, then further concludes everything in the universe must be relative. Clearly some things in the universe are relative (spatial distance, time, velocity, momentum, energy, mass, etc.) but (unfortunately for the author’s theory) some things are not relative (charge, rest-mass, space-time distance, etc.) The author tries, in vain, to explain this away with philosophical arguments. Many more philosophical arguments follow, with no suggested confirming experiments or practical ramifications.

The author concludes that if the universe must be relative, then quantum mechanics and relativity clearly follow. Clearly? Unfortunately reasoning from first principles, without mathematical rigor, can lead to the counting of angels.

Thomas points out that relativity and QM are exactly the same, both have multiple values for measurable before measurement. Well, kind of, but these are very different. QM predicts measurable are in a superposition of states for all observers, while in relativity measurable are not in superposition, but are just relative to the observer.

The author seems somewhat naïve, and highly entranced by his own insights. It is clear from the writing that others have pointed out to the author some of the fatal flaws of his insights, but the author simply brushes these weaknesses away with musings that don’t quite make sense. He repeats his conclusions many times, as if repetition gives strength to his insights.

Thomas wonders why mainstream physicists don’t flock to accept his simple insights. He wonders if it is because his insight is too simple. This is not the reason. Instead, Thomas’s insight are not widely accepted because they are neither rigorous, verifiable, nor useful.

The author goes on to propose the universe does the best it can, without external references, to manage reality. Again, a vague proposition from which almost anything could be concluded.

The author (as is quite common) mistakes superposition with multi-position.

The author is dissatisfied with MWI and the Copenhagen interpretation of QM yet seems completely satisfied with the idea that any “Macroscopic” interaction with a quantum state causes a gradual decoherence of coherent particle phase. The term “Macroscopic” is about at vague as it gets. More interestingly, and more importantly, many measurements causing decoherence are negative, that is, NOT measuring a particle causes decoherence just as certainly as measuring a particle. It is more difficult to conclude that NOT measuring a particle somehow gradually causes decoherence of a particle which turns up very, very far away. Even more interestingly and even more importantly, is the case of entanglement where measuring one particle seems to “influence” a very distant entangled particle. This is the basis of Bell’s Inequality and EPR which are key concepts that should certainly be addressed by any unifying theory, yet the author totally ignores both Bell and EPR.

The author dismisses Everett’s Multi-World Interpretation of Quantum Mechanics. Everett did not call his theory Multi-World but instead “the theory of the universal wave function” and carefully explains how observer measurements become correlated without any discontinuous wave function collapse. No splitting of worlds occurs. It is just an evolving universal wave function. I don’t accept MWI for subtle reasons, but MWI certainly should not be so lightly dismissed.

The author seems to have an out of date view of entropy, presuming entropy naturally always increases. Yet, it seems, entropy actually increases only because the universe is currently in a low entropy state and the universe is evolving towards equilibrium.

The narration is excellent, clear and with a good understanding of the material.

This is a wonderful book which explains this difficult subject as clearly and simply as possible.It certainly seems to explain the unity between Quantum Mechanics and Relativity and is a Unifying theory in my opinion. It debunks the utterly ludicrous "Many Worlds" and other slightly less unbelievable fairy tales that seem to abound among "genius " physicists! Quantum Physicists as a group seems to get so involved in details that they don't see the wood (the overview) for the trees (their linear algebra and vector space equations!). Andrew Thomas is a notable exception to this!

Relative to other similar books, not a winner

Relative to other similar books I was left absolutely nonplussed! (See what I did there?).

I'm not an astrophysicist or a particle physicist so I cannot credibly argue about the underlying science of this book. I am reasonably scientifically literate (A level Maths, Physics, Chemistry, degree in engineering from Bristol Univ) so I guess I'm within the target demographic for this book.

From my point of view the book was neither effective as popular science (bringing complex concepts to a broader audience) nor a detailed scientific treatise. So it fell between two stools.

Good arguemnet but has no mathamatics to back up his argument. But has made me think about the bigger picture. Am still looking for the book that may give me a good solid answer that link quantum physics and general relatively.