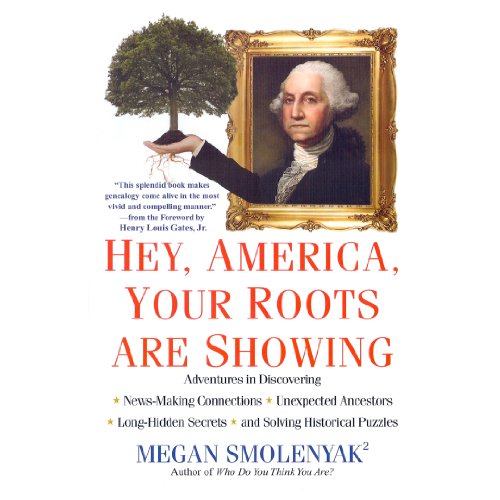 Hey, America, Your Roots Are Showing

By: Megan Smolenyak
Narrated by: Gwen Hughes
Try for $0.00

You've heard of the Dog Whisperer? Meet the Ancestor Rescuer. Part forensic scientist, part master sleuth, Megan Smolenyak has solved some of America's oldest and most fascinating genealogical mysteries. You've read the headlines; now get the inside story as the "Indiana Jones of genealogy" reveals how she cracked her news-making cases, became the face of this increasingly popular field - and redefined history along the way. How did Smolenyak discover Barack Obama's Irish ancestry - and his relation to Brad Pitt? Or the journey of Michelle Obama's family from slavery to the White House? Or the startling links between outspoken politicians Al Sharpton and Strom Thurmond? And why is Smolenyak's name squared? Test your own skills as she shares her exciting secrets. Whether she's scouring websites to uncover the surprising connections between famous figures or using cutting-edge DNA tests to locate family members of fallen soldiers dating back to the Civil War, Smolenyak's historical sleuthing is as provocative, richly layered, and exciting as America itself.

What listeners say about Hey, America, Your Roots Are Showing

must read for genealogist aficionado

I was excited about this book because one review said that it was essential reading for anyone with an interest in genealogy. I didn't find it essential at all. It is an interesting book,with various stories of cases the author has worked on. I was hoping to learn more about genealogy research techniques, but it was more about newspaper-worthy genealogy stories. The author has extensive research credentials, and I was hoping to learn more about that. Unfortunately the book came across more like boasting or trying to prove something. Perhaps it was the narrator's tones that drove that. When I first heard her voice, I wondered if it was an electronic vocalization (computer), it is somewhat robotic sounding. I wish the author had narrated the book, because I think the inflection and tone would have conveyed more sincerity and competence. I found myself just wanting to get through it.

I'm into genealogy & solving mysteries so I thoroughly enjoyed it. It's not a how to but you can definitely get a few tips out of it

Myths from the family tree

I liked when the author would explain the research process; how community is formed, and resources shared.

The least interesting were things about the Obama family, a lot of time was spent going over Michelle's roots.

She brings exactly the type of tone you want for this narration. She uses punctuation well top set up pacing and articulates very cleanly.

The tone is orated in such a gentle setting that it is fine for playing in the background or given full attention.

Did Hey, America, Your Roots Are Showing inspire you to do anything?

It should inspire people to get started on reaching out to their relatives and finding out their past.

What made the experience of listening to Hey, America, Your Roots Are Showing the most enjoyable?

This book leads you through different senarios for finding your ancestors and work-arounds to make it easier.