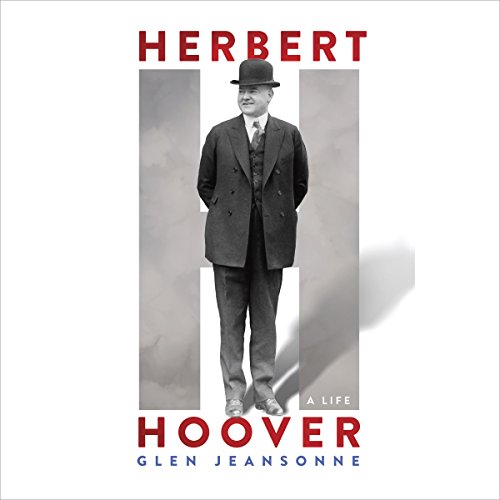 By: Glen Jeansonne
Narrated by: Mark Deakins
Try for $0.00

“At last, a biography of Herbert Hoover that captures the man in full.... [Jeansonne] has splendidly illuminated the arc of one of the most extraordinary lives of the twentieth century.” (David M. Kennedy, Pulitzer Prize-winning author of Freedom from Fear)

Prize-winning historian Glen Jeansonne delves into the life of our most misunderstood president, offering up a surprising new portrait of Herbert Hoover - dismissing previous assumptions and revealing a political Progressive in the mold of Theodore Roosevelt and the most resourceful American since Benjamin Franklin.

Orphaned at an early age and raised with strict Quaker values, Hoover earned his way through Stanford University. His hardworking ethic drove him to a successful career as an engineer and multinational businessman. After the Great War, he led a humanitarian effort that fed millions of Europeans left destitute, arguably saving more lives than any man in history. As commerce secretary under President Coolidge, Hoover helped modernize and galvanize American industry and orchestrated the rehabilitation of the Mississippi Valley after the Great Flood of 1927.

As president, Herbert Hoover became the first chief executive to harness federal power to combat a crippling global recession. Though Hoover is often remembered as a "do-nothing" president, Jeansonne convincingly portrays a steadfast leader who challenged Congress on an array of legislation that laid the groundwork for the New Deal. In addition Hoover reformed America's prisons, improved worker safety, and fought for better health and welfare for children. Unfairly attacked by Franklin D. Roosevelt and blamed for the Depression, Hoover was swept out of office in a landslide. Yet as FDR's government grew into a bureaucratic behemoth, Hoover became the moral voice of the GOP and a champion of Republican principles - a legacy reignited by Ronald Reagan and that still endures today.

A compelling and rich examination of his character, accomplishments, and failings, this is the magnificent biography of Herbert Hoover we have long waited for.

“Herbert Hoover is usually ranked near the bottom of American presidents. Glen Jeansonne’s biography of the man who was chief executive from 1929 to 1933 is a cri de coeur over what the author sees as a grievous injustice. True, Hoover did preside over the worst economic catastrophe in our nation’s history. But in Herbert Hoover: A Life, he is a fascinating and accomplished individual - the ‘most versatile American since Benjamin Franklin’ - and an idealistic, dynamic president who deserves a better reputation.” (The New York Times Book Review)

“Jeansonne portrays a president more centrist than extreme, a leader who might have succeeded in a second term.... Strong - well-written and well-researched.” (Amity Shlaes, Wall Street Journal)

“Historian Glen Jeansonne’s fine biography, the first to treat [Herbert Hoover’s] entire life…has given us an exhaustively researched, balanced, and thorough treatment of an American life very much worth knowing about.” (The American Spectator)

What listeners say about Herbert Hoover

After working in the Palo Alto area around Stanford University, I thought I knew about Hoover. There are more buildings named for Herbert Hoover in the area than any place else. This is Hoover country. But After reading Jeansonne’s new book on Hoover, I realized I knew very little about this most interesting man.

Professor Jeansonne dismisses previous assumptions about Hoover and reveals a political progressive in the mold of his fellow Republican, Theodore Roosevelt. I acquired some great trivia information from the book. Did you know that Herbert Hoover saved more lives than any man in history? In WWI and WWII, he was responsible for feeding and providing medical care to all the refugees from the Wars. He saved 1.3 million Russians from starvation in spite of the actions of Stalin. It was Hoover that had the first telephone placed on the President’s desk in the oval office. Hoover made a fortune as an engineer and businessman. He was a gifted administrator, organizer and a brilliant logistics expert.
Hoover was labeled the “Do-nothing” President but Jeansonne proves that wrong. Hoover had a dysfunctional and divided congress but Hoover did manage to get some legislation through that laid the groundwork for the “New Deal”. In Hoover’s first eight months in office he reformed the prisons, improved worker’s safety and fought for health and welfare for children. He also had reduced the federal government to its smallest size in years and was reducing the military.

The book is well written, meticulously researched and an insightful evaluation of a misunderstood and forgotten president. I felt the author repeated himself too often, which I found annoying. The author attempts to correct the distorted image of Herbert Hoover. Jeansonne provides an impressive and provocative evaluation of Hoover. In my opinion, Jeansonne attempts to balance his evaluation of Hoover. He points out his failures as well as his achievements. It is apparent that the author is attempting to correct an image, but I do not feel he crossed the line into a hagiographic biography. The book is fairly long at about seventeen hours.

Jeansonne is a Professor of History at the University of Wisconsin.
Mark Deakins does an excellent job narrating the book. Deakins is an actor and multi-award winning audiobook narrator.

Very good with a couple reservations

This was an excellent biography. However there were times it was repetitious, and while he tried to be fair, author's political bias occasionally became distracting especially in any parts dealing with FDR and The New Deal.

This is an account of a remarkable man. Before reading this book my knowledge of President Hoover was minimal and my viewpoint skewed by what little I knew. Basically I equated Hoover with the Depression. This book will open your eyes to a great man who had he been President earlier or later would likely be considered one of our great Presidents.

Great American, not so great President.

I liked this book quite a bit as it opened my eyes to who Hoover really was. He was a far bigger presence and important figure than the negative view everyone is taught in school. This book was a little more sparse with details while he was in office, or so it seemed to me, but the book wasn't too long so it ended up being OK.

Creates a good argument that the heat of past partisan politics has almost indelibly warped the historical narrative. This biography is the best criticism I’ve read of the New Deal as, if not a failure, at least very wanting as a response to the Great Depression. I’ve come to expect that all biographers, to some extent, become their subject’s champion and apologist. This biography is no exception and while the extolling of Hoover’s virtues is in plain sight, the apologies for his failings aren’t made directly. They are delivered through omissions and elisions, which I find either a dangerous attempt to obscure hard truths or a sad ignorance of historical perspective.

great book to listen to

great book to listen to. little redundant in some areas but lot of facts and entertaining throughout listening

Author is a sycophant

I wanted the headline to read "Got new appreciation of Hoover, but author was sycophant", but I was limited by 50 characters.

I found this to be a fascinating biography of a president that has been so demonized in history. I am an engineer, so I really love that Hoover was a mining engineer and thought like I do in a logical and methodical way. I love that he did so much good in the food relief programs that he ran. That is the opposite of how he is portrayed. Ii was fascinated by how progressive he was in the earlier part of his life which is the opposite of how he is portrayed. He even showed some of that in his presidency, if the author is to be believed, with the programs he put into place to address the Great Depression. However, I am not sure how much of that I can believe because the author is such a huge sycophant of Hoover. He can barely say anything negative about him and spins some of the well documented negative things he has done into non events or good things. He also was much more harsh to Hoover's opponents, like FDR, than any author has ever been. He really shows his extreme partisanship there. Then he takes positive things that previous opponents have said about Hoover out of the context of when they were said much later on and cherry picks one journalist or one article that are favorable to Hoover to bolster the author's AGENDA.I don't know what I should believe as a result.

It’s easy to dismiss President Hoover as merely the leader during one of the worst economic time periods in American history but in doing so the student also dismisses one of the greatest influencers and change agents of the 20th century. His parts in both world wars and hand in shaping the politics of the modern era should be recognized with respect and admiration.

"A Love Letter" is the appropriate subtitle for this book. It is clear that the author's intention was to define Hoover as one of the greatest humans to ever grace the planet. Apparently the author thought he never made a mistake and was correct in all of his beliefs. And of course, FDR was wrong in everything he did. That being said, Hoover had a remarkable life and deserves a thorough biography, but maybe not one as slanted as this.

Sets the record straight on how impactful Hoover was during his lifetime. Also tells of deceitfulness of Roosevelt and Truman to just bash and blame Hoover even though Roosevelt in 8 years couldn’t solve the problems of the depression. Excellent book