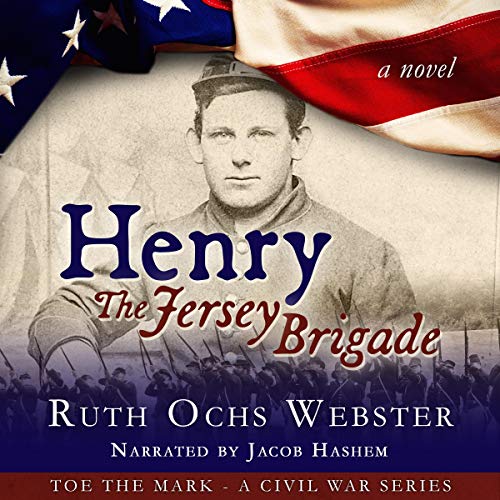 By: Ruth Ochs Webster
Narrated by: Jacob Hashem
Try for $0.00

Henry Marts was 19 years old when he defied his Quaker faith and answered the call from President Lincoln to defend the Union. Fully expecting to be home in a matter of months, Henry left behind his parents, his work as an oysterman, his sea captain brother Will, and his sweetheart Christiana. Henry, and his comrades in the 3rd Regiment New Jersey Volunteer Infantry, would experience some of the most compelling moments of the Eastern campaigns.

Experience their triumphant surge up South Mountain at Crampton's Gap. Bear their frustration as they are held in fitful reserve at Antietam. Feel the pain of being the somber rear guard during the long, bitter retreat from Fredericksburg. Witness Pickett's Charge from their hilltop vantage point. Be knee-deep in action at Bull Run Bridge, Chancellorsville, and the Wilderness. And advance up Laurel Hill at Spotsylvania Courthouse. There Henry would face his enemies and inner demons in one final struggle....

Historical fiction based on the military record and life of Henry W. Marts and the regimental record of the Jersey 3rd. First in the Civil War series called Toe the Mark.

What listeners say about Henry: The Jersey Brigade

This story is rather dry and uninspired, due in part, perhaps, to the lackluster performance by Jacob Hashem. His narration is rather flat and uninflected.

I think the reader should be quite familiar with US Civil War history in order to fully appreciate this story.

The narrator brings life to the author's well woven words.

This historical tale is well told and interesting. I don't usually care much for civil war stories but this one has more heart and soul than most.