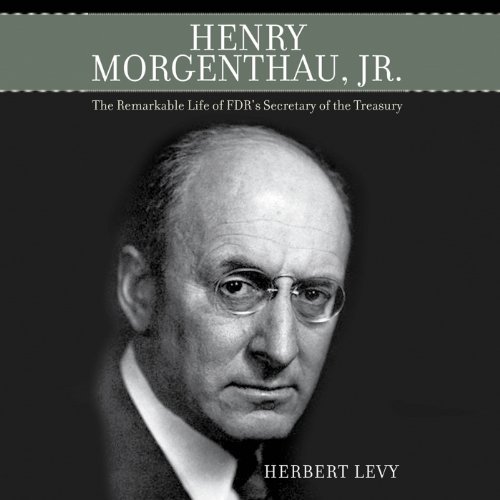 The Remarkable Life of FDR's Secretary of the Treasury
By: Herbert Levy
Narrated by: Fred Sanders
Length: 16 hrs and 59 mins
Categories: Bios & Memoirs, Political Figures
3 out of 5 stars 3.3 (4 ratings)

A fascinating exploration of early- to mid-20th-century political and social structure as seen through the eyes of a Roosevelt technocrat.

Henry Morgenthau, Jr. was a young man living in an interesting political and social atmosphere. Surrounded by people who viewed the world through a Social Darwinist lens, and grappling with his identity as an American Jew during the atrocities of WWII in Europe, Henry Morgenthau, Jr. played an integral role as Roosevelt’s secretary of the treasury during a tough economic and political time.

Henry Morgenthau, Jr. explores the life of this native New Yorker, growing up in a business-minded family, spending most of his teenage years at boarding school, and feeling isolated from his peers. Morgenthau found true passion in farming, and it served him well during the years that FDR was governor of New York and again after Morgenthau’s retirement from political life. Morgenthau established not only a working relationship with FDR during his presidency, but also a personal relationship; one that allowed him some freedom of expression in what he viewed as a sometimes intolerant era.

Herbert Levy has done extensive research at the archives in Hyde Park to include many of Morgenthau’s personal letters in this in-depth account of the man who crafted a controversial plan for the reconstitution of Germany. This book explores the complex and oftentimes frustrating world in which Morgenthau was forced to live and illuminates his odyssey as a Roosevelt technocrat.