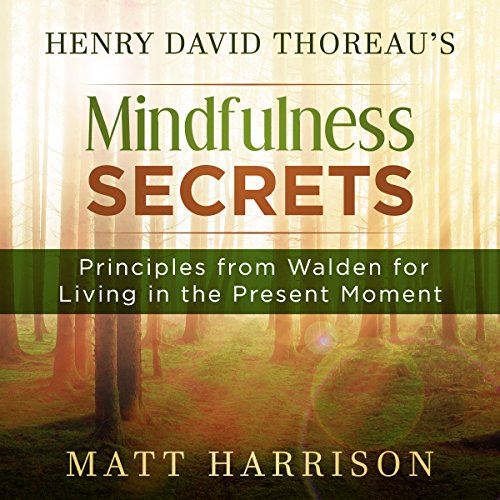 By: Matt Harrison
Narrated by: Nate Sjol
Try for $0.00

Thoreau writes in Walden, “I went to the woods because I wished to live deliberately, to front only the essential facts of life, and see if I could not learn what it had to teach, and not, when I came to die, discover that I had not lived.... I wanted to live deep and suck out all the marrow of life...and reduce it to its lowest terms.”

At Walden Pond, Thoreau lived an examined life and realized his full potential while simultaneously developing a spiritual view of the natural world and where humans find themselves in it. Much of Thoreau's time at Walden Pond was spent becoming more mindful, a lesson from which we could all benefit in the hectic, technologically advanced society of modern day. Millions of people worldwide spend vast sums of money in attempting to achieve the type of mindfulness that Thoreau achieved for free and penned in Walden almost 200 years ago.

What is mindfulness? Mindfulness can be described as full awareness and enlightenment. It involves constantly being aware of the present moment and always looking at what there is to be seen. However, mindfulness involves more than just the sense of sight. Thoreau invoked all five senses in his mindful practices during his time at Walden Pond. He used these five senses to fully “know” his world. As he wrote in his later journals, “A man has not seen a thing who has not felt it.” Granted, most of Thoreau's contemporaries who knew him say that Thoreau's senses were more finely tuned than those of an “ordinary” person, as he was able to hear faint peeps of animals who were far away or smell goods passing on a freight train. However, anyone can learn to use their five senses to their fullest potential.

What listeners say about Henry David Thoreau’s Mindfulness Secrets: Principles from Walden for Living in the Present Moment

A wonderful way to open up to the World

Any method that can take people away from their electronic gizmos is welcome.

With a good Narrator you can begin to use all your senses again.

I enjoy all books that help break down the chaos in my mind and bring me back to the present. I wish I had this book when my kids were little and maybe I wouldn't have missed so many precious moments by being stressed about the future. I highly recommend this very well narrated book to anyone seeking ways to deal with anxiety & stress.
I was given a free copy of this book at my request and have voluntarily decided to leave this review.

A Gift For the Soul

I thoroughly enjoyed this ~ so much so, I listened to it twice straight through, and can see the benefit in reviewing it every few months. I live near Vancouver, BC and have visited Concord, Mass every fall for the past 5 years to stroll the woods surrounding Walden Pond to connect with Thoreau’s teachings. Standing inside his cabin is both inspirational and transformative. Harrison ties it into the Tiny House movement ~ of which I am a fan (full-time) and member (part-time) ~ however the cabin is really just a small room. I would surely benefit from a year’s worth of living in such simplicity. In a world that it spinning out of control, where people are experiencing anxiety at record levels, and ‘affluenza’ reigns, the more of us who embrace Walden’s lessons, the better. This audio book was a gift to my soul.

I really enjoyed this concise biography of Henry David Thoreau. I had no idea that he was a powerful force for mindfulness! Some of his beliefs seem crazy to me now (e.g. his diet), but perhaps he was just a novel thinker who got some things right and other things (very) wrong. Nevertheless, I greatly respect his pursuit of simplicity as well as his unwavering opposition toward slavery; in these regards, he was well-ahead of his time.

The narrator spoke clearly and had a pleasant-sounding voice.

As an introduction to mindfulness, it's a good one. But, what attracted me to the book was Henry David Thoreau. Though it's been a while, I've always liked Thoreau's work, and this had so many antidotes about him that I didn't know. The biographical information left me wanting to learn more about the man himself. And, his journey into mindfulness was another interesting bit. I'm not sure if I was new to mindfulness how the combination of sort of an intro to mindfulness blended with Thoreau's own story and journey would feel. But, because it wasn't new to me, I found myself really wanting more of the information on him, and engaged in hearing about how he specifically went about the journey.

I believe Mr. Thoreau was born David Henry🤔
Please look at that and correct if possible,
.
Thank you

I liked this short book.This was a short but nice intro to Henry David Thoreaus ideas on mindfullness.Nate Sjol narrates nicely.I was given this book by the narrator,author or publisher free for an honest review.