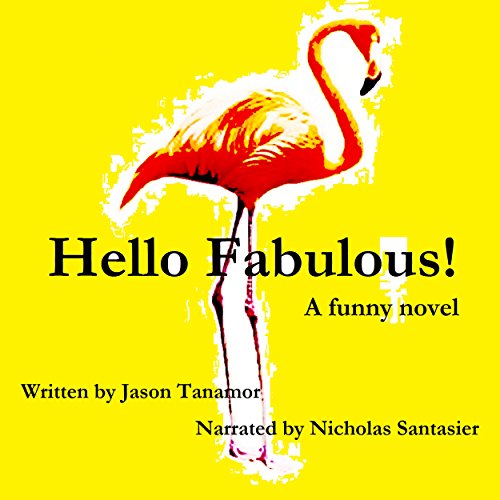 From the author of Hello Lesbian! comes another comedy called Hello Fabulous!

The Flamingo, the biggest openly gay event in the world, decides to move from its usual destination of Las Vegas to the lesser-known city of Moline, Illinois. The event features gay musical acts, clinics, and novelties, and is coming to Moline for the first time due to tax breaks and the fact that the mayor is the uncle of the one and only fabulous host, Spencer Gayman.

Randy Straight, a boring hetero, is continually mistaken for Gayman. This mistake begins to snowball, with the media believing that Gayman has hit the town well before the scheduled event to perhaps scout out restaurants, tour, shop, or all of the above. Straight then sees his life go from "straight and boring" to "gay and fab-you-luss" overnight. He begins to receive VIP treatment in the form of restaurant, hotel, and clothing comps. Not to mention the occasional hetero woman willing to turn Gayman straight.

Straight's super hetero friends, Peter Christman and Jack Dudemeister, begin to enjoy the perks of being in a celebrity entourage. They encourage Straight to play the part - 100 percent. That is until Gayman comes to town for real after hearing that his good, gay name has been tarnished by being seen in places like K-Mart. "Oh no he dih'nt!"

Hello Fabulous! is a hilarious story about mistaken identity that results in a climax that determines the real fabulous one. Oh, and there's a giant flamingo, too!

What listeners say about Hello Fabulous!

A funny tale about mistaken identity.

This is one of those funny "what if" situations involving a hot topic in today's society - homosexuality. It's not meant to be offensive but there are subtle stabs at those who oppose it. After all, Hello Fabulous! is about a homosexual event.

It is all done in a humorous way; if you're looking for a few laughs and an easy read, this is definitely the book for you. Tanamor does a great job closing all the little story lines like the giant flamingo and the reporter with the really long Hispanic name.

The narrator, Nicholas Santasier, also does a good job telling the story how it should be told - goofy and with humorous voices.

Light, witty & entertaining. Definitely chuckle worthy but not a LOL for me due to the narration. The characters are engaging; I love their names! All in all a fun short audio.

The gay festival The Flamingo takes place in a new location this year. A local guy is wrongly taken by many as one of the organizers, triggering all sorts of expected situations.

This book pretended to be a comedy, but most of the time it was more of a satire. It is full of stereotypes and did not laugh as much as the author intended. I think it just counts as anecdotic.

Nicholas Santasier' voice reminded me a lot of the narrator in Drama Dolls, the other author's novel. Although he tried to emphasize some parts, like the song that Randy hears in his head all the time that he needs to act gay, his tone was quite plain when interpreting the characters, and I had problems differentiating them, especially when Randy is with his two friends. It is like neither Tanamour nor Santasier make an extra effort to give them different personalities.

The characters are quite one-dymensional, but this is rather normal in an under 3 hours book.

It is a quick and light listen, but full of stereotypes and that it is not as funny as I thought it would be.

Good But Not What I Was Expecting

Note: I received the audiobook for free in exchange for an honest review.

The narrator of this book, Nicholas Santasier, did a good job with the different character voices. I’m not sure I would have enjoyed this book as much if I had read a printed copy or an ebook instead of listening to the audiobook. There were things I liked about this story and things I did not, resulting in the 3-star rating.

First, I thought the summary sounded good and was looking forward to a funny story. It did have its moments, but not enough of them. One of the funniest parts for me was how the high school boys kept trying to steal the giant flamingo. In the end, I felt that this book worked more as a satire than a comedy, as it skirted the edge of being offensive, making fun of just about every stereotype possible. And these stereotypes weren’t all gay related, either. The one which stays in my mind was the Hispanic female reporter with the six or seven names in her surname (I’m sorry I didn’t write them all down so that I know the exact number). It was funny the first few times the names were read, but towards the end of the story I was just tired of hearing them.

Too many times, viewpoints changed mid-paragraph. In one scene in particular, we’re seeing things happen from Randy’s point-of-view. Suddenly, we’re switched to a woman’s point-of-view as she tries to work out who Randy is. We’re in her thoughts for a couple of sentences, then we’re back with Randy. The woman is important in moving the story along as she’s the one who starts the rumor that Randy is Gayman, so I can see how the author would want the reader to know her thought process. It just should have been written so that it didn’t seem like her thoughts were jumping up in the middle of Randy’s like that.

The dialogue tags also jolted me out of the story several times. That could have been because of the emphasis the narrator put on the ‘he said’, ‘she said’ after reading the dialogue. When there are two people speaking, there doesn’t need to be that many dialogue tags as it’s usually clear who is saying what. Because this story had three friends speaking together in many of the scenes, the author has a tougher time trying to keep the dialogue tags to a minimum. It’s possible to do, just not easy. Whether it was the writing or the narrating, it’s never a good sign when the reader notices the tags.

I really wanted to like this story more. Although it wasn’t bad, it just wasn’t the funny comedy that I was expecting.

I thought this was a very cleverly-written book. Its funny, light, and can be listened to in under 3 hours, so I was able to listen during a couple of lunch breaks. I will admit that it wasn't quite as funny as I thought it would be (I didn't really have any laugh-out-loud moments), but it was still very enjoyable. I would check out other books by this author. A note on the narration: I really didn't fall in love with the narration. I actually thought it sounded rather "flat." The narrator isn't bad, but I was hoping for more differentiation between the different characters.

This was a funny look on a topic that is very serious in today's society. The narrator did a great job keeping it light hearted and the author did a good job not getting too political about the feelings of homosexuality.

This was a funny story and it could have been better if it were only longer.

The narrator was good but at times his voice sounded crackily.