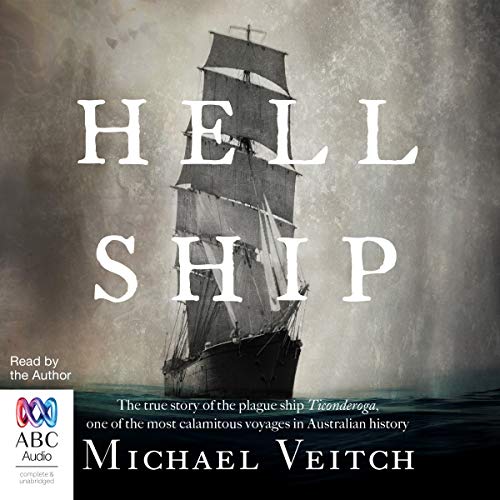 The riveting story of one of the most calamitous voyages in Australian history, the plague-stricken sailing ship Ticonderoga that left England for Victoria with 800 doomed emigrants on board.

For more than a century and a half, a grim tale has passed down through Michael Veitch’s family: the story of the Ticonderoga, a clipper ship that sailed from Liverpool in August 1852, crammed with poor but hopeful emigrants - mostly Scottish victims of the Clearances and the potato famine. A better life, they believed, awaited them in Australia.

Three months later, a ghost ship crept into Port Phillip Bay flying the dreaded yellow flag of contagion. On her horrific three-month voyage, deadly typhus had erupted, killing a quarter of Ticonderoga’s passengers and leaving many more desperately ill. Sharks, it was said, had followed her passage, as the victims were buried at sea.

Panic struck Melbourne. Forbidden to dock at the gold-boom town, the ship was directed to a lonely beach on the far tip of the Mornington Peninsula, a place now called Ticonderoga Bay.

James William Henry Veitch was the ship’s assistant surgeon, on his first appointment at sea. Among the volunteers who helped him tend to the sick and dying was a young woman from the island of Mull, Annie Morrison. What happened between them on that terrible voyage is a testament to human resilience and to love.

Michael Veitch is their great-great-grandson, and Hell Ship is his brilliantly researched narrative of one of the biggest stories of its day, now all but forgotten. Broader than his own family’s story, it brings to life the hardships and horrors endured by those who came by sea to seek a new life in Australia.

What listeners say about Hell Ship

For those researching family history, this is a great example of the grit required to make the voyage to Australia. This story unselfishly focused on all of the passengers and crew of the Ticonderoga and not only the efforts of his ancestor to manage the disease and death of those aboard. Well worth the read!

This book is riveting as a history of migration to Australia. The author is also a great narrator.

As tragic as the story of the ship is, I loved every part of Michael Veitch's telling of it. As author and narrator, Veitch has done a fine job of pulling together a lot of historical threads and expressing them in a way that is informative and compelling. This is a must-read (or, listen!) for anyone interested in colonial Australian history, sailing and immigration. Family historians will find it inspirational for researching and story writing. I very much appreciated how Veitch wove together his own ancestors' experience with that of others in Scotland, Ireland, England and Australia and then used his imagination to make us feel as if we are there on the ship. People who just like true stories told very well will simply enjoy it as a ripping yarn.

more about the ship then the people