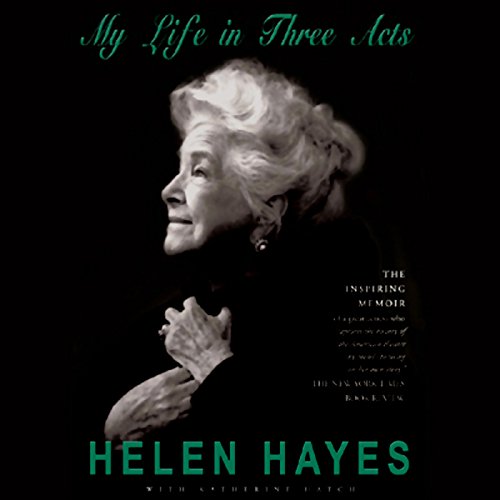 By: Helen Hayes,Katherine Hatch
Narrated by: James MacArthur
Try for $0.00

Helen Hayes, acclaimed "First Lady of the American Theatre", has been on stage, screen, and television for more than fifty years. In that time she moved among the world's most famous and talented: actors, film stars, writers, businessmen. She speaks with wit, wisdom, and candor on topics both public and private. She offers deft behind-the-scenes portraits of such personalities as Joan Crawford, William Randolph Hearst, Charlie Chaplin, F. Scott Fitzgerald, Richard Burton, Lillian Gish, Dwight D. Eisenhower, and Gloria Swanson. She tells of the advice older actors gave her and of how she in turn gave advice, continuing the tradition. She treats us to delightful anecdotes about Ethel Barrymore, John Ford, and Al Capone.

At the same time, she reflects more seriously, and with great honesty, on the painful parts of her life: the alcoholism of those close to her; the guilt of having not spent more time with her young children; the remorse about the fact that her success overshadowed her playwright-screenwriter husband, Charles MacArthur; the difficulty of being alone after the deaths of her daughter and husband. She tells about the pleasures and discomforts that go with being a celebrity, about her retirement in Mexico, about her sense of responsibility to support causes, to help others. And, finally, she expresses her strong views on what is wrong with the American theatre today and what has always been wrong with Hollywood. An engrossing account of a rich and productive life.

What listeners say about Helen Hayes

A Modest Yet Captivating Portrait Of A Great Lady

Lesser known to today's audiences, Helen Hayes was once one of the most famous stars in America and abroad. Yet her autobiography is unassuming, and even modest in it's scope. She spends no time tooting her own horn, instead she credits those who helped her reach the heights of stardom, and speaks lovingly yet honestly of her husband and the demons he faced, as well as the tragic death of her daughter.Hayes paints an intensly interesting picture of life on the Broadway stage and in Hollywood, including entertaining memories of stars such as Norma Shearer and Joan Crawford.Narrated by her son,this well done and touching biography is a must listen for those who love old Hollywood and/or a well done memoir.

Helen Hayes takes you on a trip around her life; accidently a child actor; growing up on stage; fun theatrical stories; perfect! Really enjoyed it. And the reading was great, too. She really must have been as sweet as she always looked.

Helen Hayes was a gifted performer. She exuded elegance, grace, kindness and dedication. This version is well done, but even though it is much abridged the version read by the actress herself will always be my favorite.

A man narrates a woman's biography

Yeah...I'm having trouble with this and I think they simply missed the boat by having a man, an excellent narrator, read a woman's biography. The story is excellent and interesting. But be prepared for Helen Hayes with a very deep voice. As much as I was finding it interesting to listen to, I had to simply stop.
It's sort of creepy.