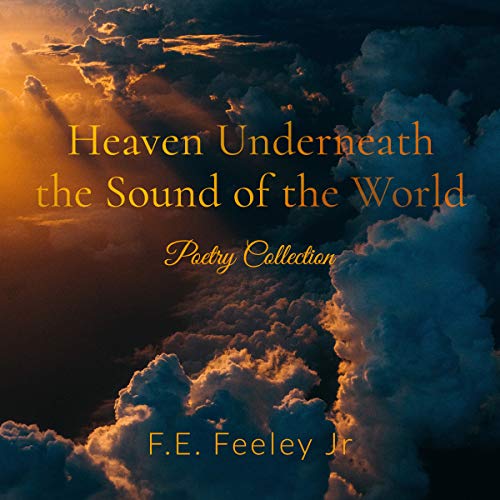 Heaven Underneath the Sound of the World : Poetry Collection

A collection of Poems by F.E. Feeley Jr.

F.E. Feeley Jr is the author of several books including The Haunting of Timber Manor, Objects in the Rearview Mirror, Still Waters, When Heaven Strikes, and Closer. He’s also been a part of several anthologies including Indigent as well as Gothika 5: Contact. This is his first published work of poetry.

Born in Detroit, Michigan, in 1981, he became an avid reader and lover of the written word. Inspired by the world around him, he now lives in South Texas with his husband, John, their German shepherd, Kaiser Wilhelm, and their cat, Ms. Abigail Adams.

What listeners say about Heaven Underneath the Sound of the World : Poetry Collection

very enjoyable experience that I plan to repeat

This is the first time I've had poetry read to me , and I liked it. I liked the introspections and observations of the author in the poems. The narrator brings another dimension to this that made it more intimate and real. Enjoyable and entertaining and I recommend you try it out.

An interesting collection of poems

I was interested to see how a poetry audio book would be and I was quite surprised. Poetry is supposed to be performed and it works well done as an audio book. It's written by an American author so is very based in their culture and history for references but the personal side of things still is universal for all.

Some poems are about simple things while others have a more broader political meaning such as 'Ode to a Black woman'. Some are very personal like the one about sharing a soul with his husband.

The narration seems to read quite well with a few bad accent issues such as reading didn't as ditn't. The reading has emphasis in the places where it needs it but it could be read a little slower in places and perhaps with a bit more emotion. I could follow it well enough however and it was enjoyable enough.

I’m not much of a fan of poetry in text form, and find it much more engaging when performed out loud, so I was interested in trying out an audiobook of poetry for the first time.

This collection contains a variety of themes. Several of the poems focus on nature, which definitely appealed to my inner Pagan, evoking seasonal scenes of the outdoors. The one that really stood out to me was “The Rain Remains the Same” — I could really imagine a storm outside! The four “Sisters” poems were also very evocative. Some poems are more personal, recalling moments from the author’s childhood, personal life, romances, and inner thoughts. Yet others, such as “Ode to a Black Woman” and “We are Gay,” delve into political issues that are close to the author’s heart, albeit with a positive tone.

Unfortunately, however, to me this interesting anthology was let down by a poor performance. The narrator rattles through the poems at a rapid pace instead of letting the words breathe, and reads in a very flat tone, with very little emotion. It’s a shame really, and I feel that perhaps they would have been better performed by the author himself.