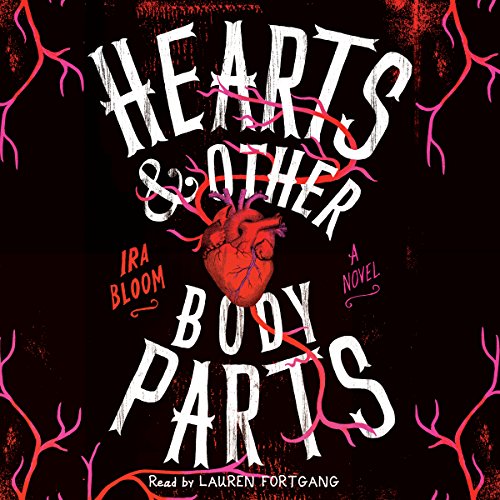 By: Ira Bloom
Narrated by: Lauren Fortgang
Try for $0.00

A novel of love and monsters.

Sisters Esme, Katy, and Ronnie are smart, talented, and gorgeous, and better yet...all three are witches. They have high school wired until the arrival of two new students. The first is Norman, who is almost eight feet tall and appears to be constructed of bolts and mismatched body parts. Despite his intimidating looks, Esme finds herself strangely - almost romantically - drawn to both his oversized brain and oversized heart.

The second new arrival is Zack, an impossibly handsome late transfer from the UK who has the girls at school instantly mesmerized. Soon even sensible Esme has forgotten Norman, and all three sisters are in a flat-out hex war to win Zack. But while the magic is flying, only Norman seems to notice that students who wander off alone with Zack end up with crushed bones and memory loss. Or worse, missing entirely.

Hearts and Other Body Parts is a wickedly addictive novel about love, monsters, and loyalty. And oh yeah, a Japanese corpse-eating demon cat.

What listeners say about Hearts & Other Body Parts

If you are looking for a beautifully written story pulling from centuries of lore surrounding three strong, independent, witch sisters who come against a foe, pulling from their wit and ingenuity and the help of their friends, this is not the book for you. CW: rape culture, pediphilia, sex trafficking, eating disorders, and spoilers.

Three sisters, the sixteenth generation of witches in the family find themselves in a high school drama as vapid as any sitcom. There's the artsy one, the nerdy one, and the pretty one. The three sisters befriend a strange new kid, Franklin N. Stein, who has a secret, probably to do with his odd appearance. Norman (He goes by his middle name, for obvious reasons) is over eight feet tall and made up of a mishmash of body parts some too large and others too small for his body. The bolts coming from his neck are also a sure way to attract bullies at school. With the help of the Silver sisters, Norman begins to find a place at the table, until....
Enter The Ancient one and Zach, vampires from somewhere in eastern Europe with a plan to escape the attention of local authorities in a small town in nowhere, USA. To do so, the Ancient one commands Zach to kill the "brides" they have harvested, ten in all. The author makes a point of telling the reader that at least one of the girls in their possession was purchased from the sex trade. Zach seduces each one, drinking their blood, comparing it to a wine tasting, then slits their throats. Did I mention that this book is recommended for kids ages 9-12?
Que Zach in American high school. One would think that three witches, one of whom is supposed to be bookish and witty would notice the kid with sunglasses and gloves with a "skin condition" in her class, but no. All three, in fact every female in the school student and teacher, are madly in love with Zach. While he appears sixteen, he is in fact MUCH older. Teachers have no business fawning over a student and even vampires should have rules against pedophila and/or statutory rape. Again this book is written for YA, ages 9-12. I wanted the Silver sisters to use their experience, family heritage and wit to overcome the evil in their midst, instead I got hours and hours of petty, vapid, whining about looks, lip color, hip size, and dreamy eyes. It takes the girls' ancient demon cat to inform them that Zach is actually a vampire and lay out the best line in the book, "You're a witch and you don't believe in vampires?" The petty school yard whining of who is the prettiest and who deserves the attention of the hot guy where sweeter than a bucket of sugar and just as sickly. Above this, Norman tries to warn our bookish intelligent protagonist and she accuses him of molesting her which leads to his suspension. In the era of the MeToo movement, this "cry wolf" accusation from Esme is a ridiculous undermining of the strength of female voices which we have worked so hard to obtain.
It was not until the Red Demon, a sort of demonic accountant/lawyer showed up that I finally stopped listening. The demon is described as dark and oily with a hooked nose and speaks yiddish. This being the straw that broke the proverbial camel I just could not give this book any more of my time. There were other less problematic issues, such as the authors lack of research into Wicca which the girls use as a cover (Wicca has nothing to do with Satanism), the one dimensional characters of the three sisters, the flippant use of bulimia as a plot device, the absent and absolutely bumbling father (Barry), and equally distant mother, and the very detailed account of the murdering of the only small child in the book (Billy). This book could have been so good. Instead it was a sickly sweet attempt at drawing together the foundations of great folklore and dark literature into a cheap imitation filled with the glorification of sex trafficking, pedophila, statutory rape, rape culture, and anti-semitism.
So if you're looking for a good fun read based on centuries of witches, vampires, monsters and more, skip this one. Mary Shelly will be proud.