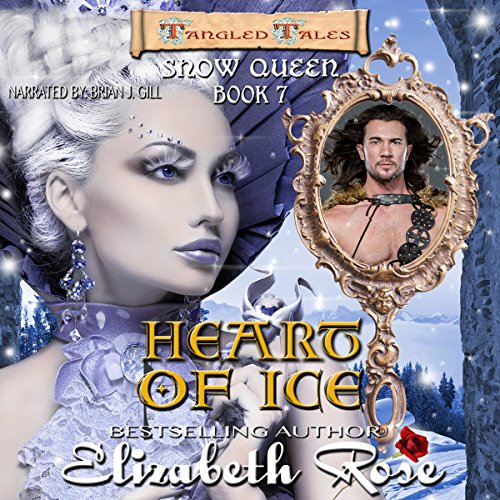 With a heart as cold as ice, Lady Eira Koldottir claims her late father's throne and the frozen island of Skol after her enemy has killed off her entire family. Preparing for another attack that is sure to come, she needs every able-bodied warrior to fight with her.

When two strangers appear on the island, she realizes it is an English knight and his squire. But Sir MacKay de Bar has no desire to help her. He only wants to find his way home.

MacKay is the last of the de Bar siblings to be cursed by the evil witch, Hecuba. Stranded with his squire on a frozen island with a ruthless ruler he calls the Snow Queen, his only desire is to return to England.

But when his curse takes hold, he starts seeing good as evil, and anything bad looks good in his eyes - including the coldhearted Snow Queen. The meaner Eira treats him, the more MacKay likes her. She wants his allegiance in her army, but he only wants her in his bed.

Can a cursed man and a hardened warrior woman come to terms when dark magic threatens to ruin their lives? Or will a curse turn into a blessing and turn enemies into lovers?

What listeners say about Heart of Ice (Snow Queen)

Is it really the end?

This last Tangled Tale is a doozy... a real cool way to tie everything up and deliver an icy-hot romance to boot! I hope Elizabeth Rose decides there are some more stories to be had in this series. As usual, it's best to use headphones for the bedroom scenes if children are present 😉

Hear it to believe it!! A must have series!!

this was the last book in the series written by the amazing Elizabeth Rose and I am devastated that there are not more in this series I just want them to keep coming and coming and coming delicious and entertaining! I can't wait you have to write Madea's story! PLEASE!!!

How wonderful this one is.
Elizabeth Rose has kept me enchanted with the Tangled Takes series.
This is shown as the last book of the series, but I would love to hear of at least one more. hint hint. :)
Brian J Gill again is a wonderful narrator!

Saved the best for last!

The male main character is again an alphahole but the twisted curse more than makes up for it.

This is the last book of the series Tangled Tales. I loved this whole series of 7 fairy tales with a twist in each one.
1. Red Riding Hood.
2. The Frog Prince.
3. Beauty and the Beast.
4. Rumpelstiltskin.
5. Rapunzel.
6. Cinderella.
7. Show White.
Each one is definitely worth a credit as I really enjoyed them and just couldn't stop listening. I finished them all in less than a week.
The narrator was ok but be had an American accent most of thr time and it was an effort for him to change to an English accent. Also I feel like he's reading a story to a child, although the stories are based on fairy tales they are not stories for children.
Looking forward to the next series especially once it's all narrated by Kevin Green. I really like him as a narrator.