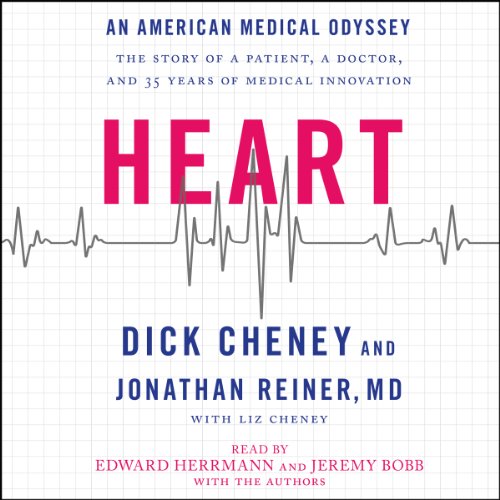 For as long as he has served at the highest levels of business and government, Vice President Dick Cheney has also been one of the world’s most prominent heart patients. Now, for the first time ever, Cheney, together with his longtime cardiologist, Jonathan Reiner, MD, shares the very personal story of his courageous thirty-five-year battle with heart disease, from his first heart attack in 1978 to the heart transplant he received in 2012.

In 1978, when Cheney suffered his first heart attack, he received essentially the same treatment President Eisenhower had had in 1955. Since then, cardiac medicine has been revolutionized, and Cheney has benefitted from nearly every medical breakthrough. At each juncture, when Cheney faced a new health challenge, the technology was one step ahead of his disease. Cheney’s story is in many ways the story of the evolution of modern cardiac care.

Heart is the riveting, singular memoir of both doctor and patient. Like no US politician has before him, Cheney opens up about his health struggles, sharing harrowing, never-before-told stories about the challenges he faced during a perilous time in our nation’s history. Dr. Reiner provides his perspective on Cheney’s case and also gives readers a fascinating glimpse into his own education as a doctor and the history of our understanding of the human heart. He masterfully chronicles the important discoveries, radical innovations, and cutting-edge science that have changed the face of medicine and saved countless lives.

Powerfully braiding science with story and the personal with the political, Heart is a sweeping, inspiring, and ultimately optimistic book that will give hope to the millions of Americans affected by heart disease.

What listeners say about Heart

Thumbs up from a Cardiologist

I really enjoyed this book. Cheney and Rainer alternate, detailing the Vice Presidents battle with heart disease over decades. Cheney's own story is interwoven with a detailed account and explanation of advances in Cardiology and Cardiovascular surgery during that time. Rainer tells the story of his famous patient with compassion and empathy. I have recommended this book to several of my staff and patients. Andreas Muench, MD

I really enjoyed listening to your book. Hope you are having a idee for 2 part of this book.

Not a fan of Dick but Heart is interesting

Let me start by saying i did not expect to enjoy this book. I am not a fan of Dick Cheney's politics and added this book to a list of books on cardiac subjects i planned to listen to in passing...

Therefore i was surprised to really enjoy it :) Jonathan Reiner talks interestingly about how he developed his career as an MD; and mixed in with this is Dick Cheney showing the human day to day experience of developing heart issues starting at the shockingly young age of 37 while running an electoral campaign! This goes on over many years showing the changes in the treatment of Heart disease and the impact on Dicks rise to Vice President.

Additionally, why on earth did people vote repeatedly for the guy they knew had cardiac events (MI) five times???

If you like medicine and politics this is a read for you.