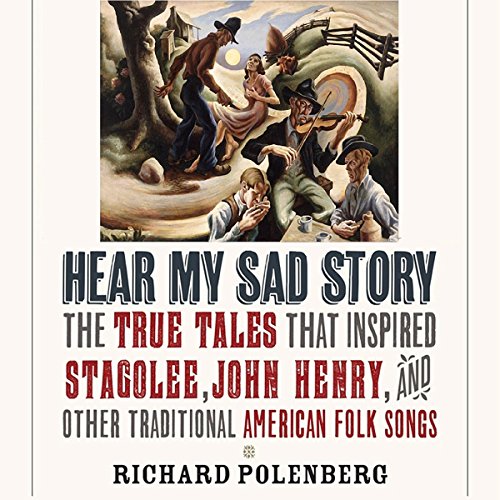 In Hear My Sad Story, Richard Polenberg describes the historical events that led to the writing of many famous American folk songs that served as touchstones for generations of American musicians, lyricists, and folklorists.

Those events, which took place from the early 19th to the mid-20th centuries, often involved tragic occurrences: murders, sometimes resulting from love affairs gone wrong; desperate acts born out of poverty and unbearable working conditions; and calamities such as railroad crashes, shipwrecks, and natural disasters. Listening to these tales of sorrow, misfortune, and regret puts us in touch with a dark but terribly familiar side of American history. Polenberg returns us to the men and women who, in song, became legends.

"An excellent book about folk songs and ballads that cover much of U.S. history in the nineteenth and early twentieth centuries."(Ronald D. Cohen, Indiana University Northwest)
"This fascinating book by one of the very best twentieth-century American historians draws on Richard Polenberg's enduring and continuing interest in folk music. Polenberg's good, crisp, readable prose ensures that anyone who likes folk music will enjoy this musical window onto the patterns of the past." (Allan M. Winkler, Miami University of Ohio)
"By giving equal weight to historical events and their reinvention as musical myths, Richard Polenberg creates a rich and colorful tapestry of fact and fable. The result is a thoroughly enjoyable and frequently illuminating volume." (Elijah Wald, coauthor of The Mayor of MacDougal Street)

The narrator ruined the book for me. I couldn't listen to it. He had a terrible way of pronouncing certain words. It's awful.