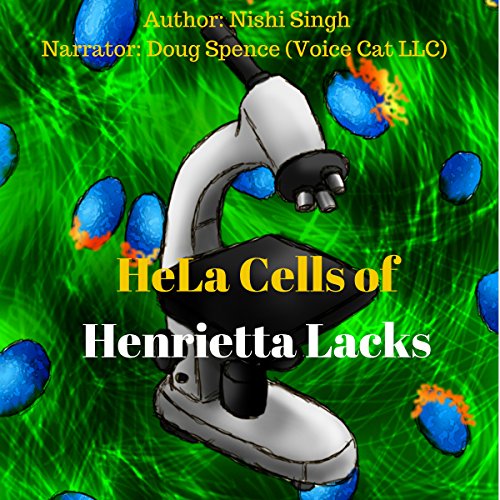 By: Nishi Singh
Narrated by: Voice Cat LLC by Doug Spence
Try for $0.00

Rebecca Skloot and her best seller, The Immortal life of Henrietta Lacks, has created a lot of interest in the immortal HeLa cells that were taken from a 31-year-old black woman called Henrietta Lacks without her family's consent at the Johns Hopkins Hospital at Baltimore in 1951. She describes the story of how Henrietta Lacks died and how her cells were sent around the world for medical research. She goes through the life stories of Henrietta and the Lacks family and the pain they endured when they found out about Henrietta's cells. Skloot's narration of the entire account is powerful, emotional, painful and even heart breaking. Her book has become a notable science reading for high school children and science undergraduates in the United States. And rightly so, Henrietta's story is a case of medical racism, violation of ethical obligation, segregation, ignorance, poverty and painful American history.

Today, HeLa cells are the most widely used cell line in the world and has been instrumental in many of the world's medical discoveries. It was the first cells to be sent to space, has helped eradicate polio and has been used in 70,000 medical studies including the development of drugs for herpes, Parkinson's disease, leukemia, and influenza.

The title The Immortal life of Henriette Lacks actually refers to the immortalization of cancer cells and we look at how HeLa cells are cultured and are able to divide indefinitely. This audiobook looks at the life of Henrietta Lacks and describes HeLa cells in more detail.

Topics covered in this book:

What listeners say about HeLa Cells of Henrietta Lacks

This book consists of a few lines rephrased and repeated multiple times. The writer struggled to create a book out of material that could fill one page. Each chapter begins with a brief summary of the entire book. I was expecting some information beyond wikipedia level but found none. No interviews, no well phrased opinions. No nothing. Just wikipedia on repeat.

Repetitive, brief and written poorly. There are unmistakable grammatical errors. What is a “layman person”?? I was disappointed and felt ripped off