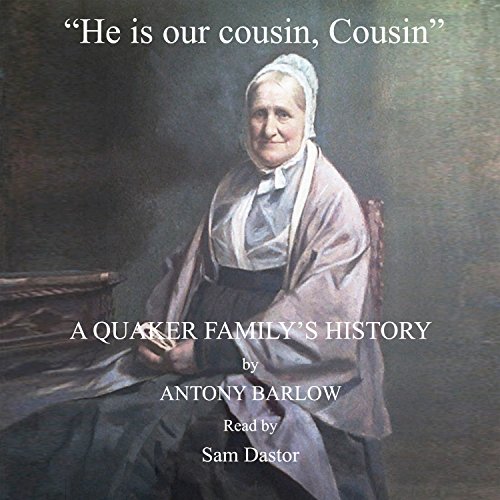 He Is Our Cousin, Cousin

By: Antony Barlow
Narrated by: Sam Dastor
Try for $0.00

Antony Barlow comes from a very old Quaker family, dating back to the earliest days of Quakerism in the 17th century, when members were still being persecuted for their beliefs. On the death of his mother, Joan Barlow, in 2007 at the age of 93, he became the custodian of the invaluable collection of family archives, including fading ancient letters, crumbling historical documents, daguerreotypes, and, perhaps most importantly, their old family Bible dating from 1616. This wonderful old book has an amazing history all its own, as in the days of persecution, its first owner, James Lancaster, fleeing from the law, dropped it while crossing Morecambe Bay, and the stains are still visible even today. This is one of many stories vividly recounted in this intriguing story.

The book also tells how a group of Dissenters in the 1650s, followers of George Fox, broke away from what he saw as the corruption of the established church and set out on their own, seeking what he called "the light of God in everyone" without dogma or creed. Many were imprisoned for their beliefs but over the centuries have come to be respected for their honest dealings and courage in the face of oppression, with famous names such as the prison reformer Elizabeth Fry, abolitionist Samuel Bowly, philanthropist George Cadbury, educational reformer Joseph Rowntree, pacifist John Henry Barlow, and diplomat and Peace prize laureate Philip Noel Baker all featuring largely in this story.

What listeners say about He Is Our Cousin, Cousin

Don't expect a thrilling romp through Quaker history, but this book captures enough of the historical facts to make it useful for anyone interested in (mostly the UK side of) the Quaker movement.

Excellent, 'proper' British narration that totally fits the era, with a few decent attempts at other accents.

Great level of detail and doesn’t assume a prior knowledge of Quakers, as the introduction provides you with a brief history (including short historical summaries spread around in the book). However, there are too many characters and jumping back and forth in history, which makes this a difficult audiobook to follow. I’m sure, however, that the written book is better and easier to follow.