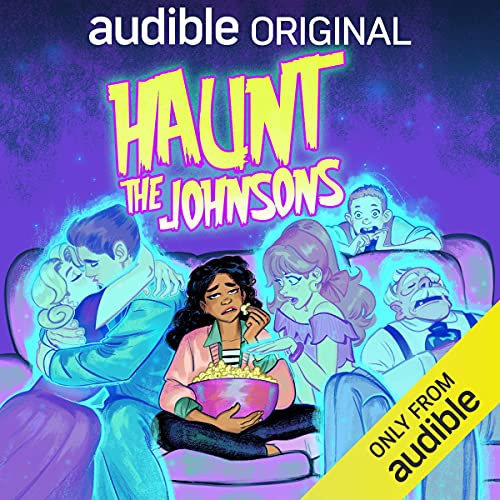 An over-achieving teenager in New York City, Luna Johnson, accidentally becomes a medium and starts to crack from seeing ghosts everywhere. When she confides in her psychologist parents, they assume it’s a mental health crisis and move the family to the small town of Doodstad, New York, unbeknownst to them, into a house with five neurotic ghosts in the most haunted town in America. Back to hiding her powers from her parents, Luna sets out to learn more about ghosts along with what being a medium truly entails. As she begins to fall in deeper with the out-of-life crowd in Doodstad, mysterious forces are keen to stop Luna from helping the ghosts.
©2020 Audible Originals, LLC (P)2020 Audible Originals, LLC
Anna Greenfield
OKAY FINE

About the Head Writer

Anna Greenfield grew up writing plays on legal pads about her American Girl dolls in Carmel, California. Later, she made real friends and wrote about them in her first adult play. All Girls, directed by Lee Sunday Evans, had its New York debut at the Kraine Theater in the East Village in 2012. There were subsequent productions by theater companies in Richmond, Virginia and Houston, Texas. She was part of the 2013 Soho Rep writer/director lab, where her play, This is Gonna Be Great, directed by Mary Birnbaum, had a public reading with cast that included Veanne Cox, Neal Huff and Jeanine Seralles. She wrote and produced four short films, Games for Girls, New Adult, Stepdaddy (2019 SXSW selection), and Sundowners (2019 Sundance Film Festival selection). Late Bloomers, her first feature film, is slated to be shot in New York in Spring 2022. Graduated 2008 from the Experimental Theater Wing at NYU’s Tisch School of the Arts.

About the Executive Producers

Aisha Dee has quickly established herself as one of the fresh new faces of Hollywood. Developing an impressive resume of diverse and memorable television and film roles, the Australian actress and singer/songwriter has captivated vast global audiences accruing a substantial fan following. Dee starred on Freeform’s comedy-drama television series The Bold Type. She will soon be seen as one of the Netflix film Plus/Minus leads alongside LiliReinhart. Dee will also soon be seen as the lead in the Australian mind- thriller Sissy, written and directed by Hannah Barlow and Kanes Senes and produced by Jason Taylor (X-Men franchise) and Lisa Shaunessy (2067). Aisha is also known for her role as Desi Biggins in the Australian TV series, The Saddle Club. Dee’s past credits include Syfy’s Channel Zero created by Nick Antosca, the MTV series Sweet/ Vicious, the movie Ghosting executive produced by Lisa Kudrow, and the series Chasing Life. Aisha’s first music EP, Ice in My Rosé, is out now on all platforms.

Nurturing an impressive body of work encompassing theatre and television, Shalita Grant’s career continues to evolve with diverse and challenging projects. "Shalita Grant gives one of the best physical-comedy performances of the year as Dory’s lawyer." - Entertainment Weekly is just one of the many accolades Shalita received for her portrayal of Cassidy, the lawyer defending "Dory" (Alia Shawkat) in season three of the critically acclaimed HBO Max series Search Party. Shalita is currently in production on the next season of the popular Netflix thriller series You. She joined the cast as a series regular and plays a locally famous "Momfluencer" who is warm and down to earth, but that’s just a put-upon act for her social media followers. The original "mean girl," and only pretends to welcome newcomers into her wealthy and elitist social circle.
Shalita’s other television work including the hit CBS drama NCIS: New Orleans as Sonja Percy, a whip-smart ex-ATF (Bureau of Alcohol, Tobacco, Firearms and Explosives) agent who prefers working alone and struggles to adapt to working alongside the NCIS team. She also starred in the PBS Civil War drama series Mercy Street, about doctors, nurses, contraband laborers and Southern loyalists in Union-occupied Alexandria, Va., during the Civil War. Her other television credits include a recurring arc on The Santa Clarita Diet, The Good Wife, Bones, and Melissa & Joey.
Segueing effortlessly between television and theatre, Shalita garnered a Tony Nomination for her work in the Broadway show Vanya and Sonia and Masha and Spike. Shalita returned to the New York stage in the summer of 2017 starring in the Shakespeare in the Parks production of A Mid-Summer Night Dream.

Langston Kerman is an LA based comedian, writer and actor. Langston is the head writer/one of the Executive Producers of Pause with Sam Jay (HBO). Langston will next be seen starring in Bust Down (Peacock), a series that he’s also co-creating with Sam Jay, Chris Redd, and Jak Knight. On screen he was most recently seen recurring as "Eagle The Archer" in the second season of The Boys (Amazon). His other acting credits include starring alongside Lake Bell and Dax Shepard as "Brandon" on the Bless This Mess (ABC) and recurring as ‘Jared’ on Insecure (HBO). Langston previously wrote for 2 seasons of South Side (HBO Max) and he recurs on the series as "Adam Bethune". Langston’s podcast My Momma Told Me is part of Will Ferrell’s Big Money Players Network through iHeartMedia. His Comedy Central Half-Hour Special aired in September 2018 along with the release of his debut comedy album Lightskinned Feelings.

Joel Kim Booster is a Chicago-bred, Los Angeles-based stand-up comedian, writer, and actor. He just wrapped the Searchlight rom-com Fire Island alongside Bowen Yang. The film, which he also wrote, is set to release on Hulu and is described as an unapologetic and modern twist take on Jane Austen’s Pride and Prejudice. Joel is currently filming the Apple TV+ series Loot created by Alan Yang and Matt Hubbard and starring Maya Rudolph.
Later this year, Joel will shoot his first hour-long comedy special for Netflix, where he will explore his experiences and observations as a gay Asian American male with commentary on identity, sexuality, cultural expectations, and more. Joel’s other TV and film credits include Sunnyside (NBC), Curb Your Enthusiasm (HBO), Shrill (Hulu), Search Party (TBS), Bojack Horsman, Big Mouth, The Week of (Netflix), American Dad (Fox), and Viper Club (YouTube Premium.) He will also be a series regular voice on the new HBO MAX animated program Santa Inc. opposite Sarah Silverman and Seth Rogen and can be seen in the upcoming film Unplugging opposite Matt Walsh and Eva Longoria. In 2017, Joel recorded a stand-up special for Comedy Central’s The Half-Hour and a full-length stand-up album called Model Minority. He has appeared on Conan, The Late Late Show with James Corden, Netflix’s The Fix, Comedy Central’s The Meltdown with Jonah and Kumail, This is Not Happening, @Midnight, Logo’s Comedy Cabaret, and truTV’s Comedy Knockout. His writing credits include Billy on the Street (truTV), Big Mouth (Netflix), The Other Two (Comedy Central), and the pilot for Comedy Central’s Problematic with Moshe Kasher.

Kristen Schaal is currently shooting another season of the multiple Emmy nominated series What We Do in the Shadows for FX. She can also currently be seen in Disney+ series The Mysterious Benedict Society, opposite Tony Hale which was just renewed for season two. She was most recently seen in Bill and Ted Face the Music, opposite Keanu Reeves and in the STX film, My Spy, opposite Dave Bautista for Amazon. Prior, she voiced the role of "Trixie" in Toy Story 4 and starred in the Fox series, The Last Man on Earth, opposite Will Forte. Schaal’s other credits include Boundaries opposite Vera Farmiga and Christopher Plummer, and All Nighter opposite JK Simmons, The Boss opposite Melissa McCarthy for Universal, and A Walk in the Woods opposite Robert Redford and Nick Nolte. She was the Senior Women’s Issues Correspondent for The Daily Show with John Stewart.
She voices the character of "Louise" in the FOX animated series Bob's Burgers, which is currently in its tenth season. She was the lead voice in Zodiac for DreamWorks and has won an Annie award for her work in Gravity Falls. She has also lent her voice to The Simpsons.
Other film and television credits include Toy Story 3, Dinner for Schmucks, 30 Rock, Flight of the Conchords, Mad Men, Modern Family, and her Comedy Central half-hour special, Live at the Fillmore, among others. Kristen appeared in The Coward at The Lincoln Center Theatre and was awarded The Lucille Lortel Award for her performance. Schaal is also a published author. She co-authored a sex guide, The Sexy Book of Sexy Sex, with husband and DAILY SHOW writer, Rich Blomquist.

What listeners say about Haunt the Johnsons

Once I got into it, listened all the way through…. A few good plot twists, some more obvious, some not so much. Voice acting and dialogue were top notch, had me laughing more than once. Great production too.

Definitely worth a try…

This was such an awesome listen!!! The lead actress is amazing, and all the voices of the ghosts! I love them all!!! Great job!

The cast is fantastic in this podcast. There will without a doubt be someone in this cast that you will recognize. I've been listening while working the last few days and it's just a really fun listen! The story is fresh! The banter between the characters will make you chuckle. Aisha Dee shines as the lead in this. Her voice acting is as expressive as her on-screen acting which is absolutely wonderful. Overall this podcast has a little something enjoyable for all ages!

Light & fun with a great cast

It was laugh out funny with a very cute storyline! Great for a Halloween read!