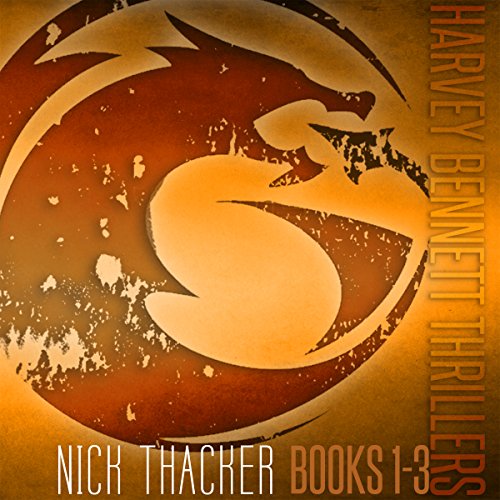 By: Nick Thacker
Narrated by: Mike Vendetti
Try for $0.00

Harvey Bennett is an unassuming everyman, the kind of guy who likes to be left alone. But when a bomb goes off at his park, he can't help but get involved.

Grab the first three books in the series for one low introductory price!

With over 1,200 reviews on Amazon (4.5-star average), these books are being compared to Dan Brown, James Rollins, and Douglas Preston, and Lincoln Child. Jump in and discover the next great series in armchair travel and adventure.

Books in this box set:

The Enigma Strain: When a bomb goes off at Yellowstone National Park, threatening the stability of the world's largest active volcano, the reclusive park ranger Harvey "Ben" Bennett is startled to realize that the blast itself wasn't the only threat: the bomb released a virus into the air, and the outbreak is beginning to infect and kill more and more people.

The Amazon Code: When her company discovers a remarkable hidden message in the dreaming brains of her subjects, Dr. Amanda Meron unknowingly invites disaster unto her company. She enlists the help of some old friends to find out what the clues are pointing her toward, but they seem to be pointing her to one of the remote places on the planet. The Amazon Rainforest.

The Ice Chasm: Near the McMurdo Station on the continent of Antarctica, a signal is seen and intercepted by a telecommunications company. They don't understand what the signal means, but whoever sent it is illegally using the company's restricted technology and satellites. Harvey "Ben" Bennett and Juliette Richardson are approached to join an expedition to Antarctica to find the source of the signal, and bring back whatever technology is hidden there.

I struggled through the first book figuring it would get better. Getting halfway through the second one I realized I can’t stand this anymore. The preposterous storyline was surpassed only by the droning monotonous voice of the narrator and about as much emotion as a slice of white bread. I don’t know how I stood it as long as I did.

I enjoyed the story line but it was almost painful listening to the narrator stumble over the lines and annunciation repeatedly.

Three books in a row, too much to handle

The three books in one took a long time to get through. One other reviewer explains what each book is about. The narration in monotone style makes it difficult to listen to. A lot of research went into each book. Would be fun to explore the three regions of earth that he writes about. Yellowstone, Amazon and Arctic. History lesson learned. Starting book four stand alone now, don't feel that rush to get through when I had all three in one package. The chapters are continuous, books 1, 2 and 3 all chapters are numbered in a row, not by book 1, 2 and 3.

THE ENIGMA STRAIN by Nick Thracker. A bomb goes off in Yellowstone Park, releases a virus, into the air, killing people. Ben teams up with Juliette a CDC agent, to find out who was behind the terriosm. When the threat becomes personal they decide to find out and end it. A chase,against time, the military, that keeps you to the end.
THE AMAZON CODE
The break through she knew she could do it. They were seeing into a person, and theIr dreams. Then the hidden message appears, and the adventure begins, covering the globe to the Amazon Rainforest. The suspense follows to the end.
THE ICE CHASM
Roald had been alone before, the frozen nothingness was everywhere, cutting thru him. Trudging, the killing wind , when he notice something in the ice.. Hours passed, all he could tell it was a square metal plate, digging more, he finds it was a door. Door lead to somewhere. Once again the author has captured us, in this frozen land, what did he uncover. Action packed, and full of intrigue.
Given audio for my voluntary review and my honest opinion

What happens when a great author hands over his books to a superb narrator? Harvey Bennett Thrillers , Books 1-3!

As I was listening to these stories, I realized I had previously read all three of these stories. I remembered enjoying them and can state listening was just as enjoyable, not only because of Nick Thacker’s stories but Mike Vendetti’s narration which really brings Harvey Bennet to life.

I tried. I really tried. Poor writing.Poor story and even worse narration... I do not recommend this to anyone.

Great three book series and great cliff hanger.
well read and kept me interested.
I am looking forward to the follow on.

Only starting Book 3, but for someone who is not even close to being an "agent" or a "mercenary" or anything even remotely like any of these types, Harvey Bennett is smart and not afraid of getting involved in anything that will, hopefully, lead to his ultimate goal - Find the Dragon guys!
The narrator is fine on different voices - you can tell who is who - but in the narration he seems to talk almost as if he is somewhat tipsy. Slurring and not crisp in his pronunciation.

A complex plot line with multiple characters should make this series absorbing. Unfortunately the very dated-sounding narration slows the action and stifles the energy of the books.