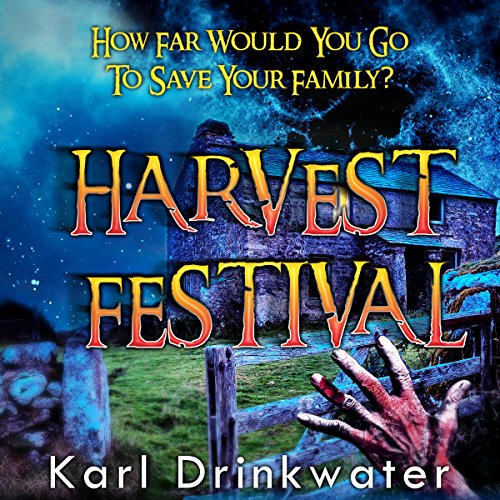 By: Karl Drinkwater
Narrated by: R J Alldred
Try for $0.00

Then the evening sky filled with strange clouds that trapped the heat below.

Now Callum wakes, dripping in sweat. Something has come to his isolated Welsh farm. If he's going to keep his family alive during this single night when all hell breaks loose, he'll have to think fast. And when he sees what he's facing, he suspects even that may not be enough.

This blast of a book can be listened to in one nail-biting session.

What listeners say about Harvest Festival

I enjoyed this short listen and it was the first one I listened to by author and most likely not my last. It was a fast creepy read concerning the hardship of family surviving this weird storm over their farm. Callum is the most stable one of the family, son is not helping and his daughter is your typical non cooperative teen. How far will you go to save your family? It was nail biting intense and surprise ending. Highly recommend this to anyone who likes a suspenseful thriller. I was voluntarily provided this free review copy audiobook by the author. THANK YOU!

One of the better horror stories I have listened to. I was on edge throughout the book. I received this audiobook for free through Audiobook Boom for my unbiased review.

Harvest Festival was truly a nail biter. This was an excellent listen. I enjoyed the way it started out with a pretty typical family situation with them living on a farm and the son being interested in astronomy and the daughter bored and chatting on her phone. It's dinnertime, then bedtime, then...

Karl Drinkwater is a terrific author and I hope to listen to more of his work. I thought this short story was absolutely exciting. Couldn't stop listening.

R J Alldred's performance was incredibly good. Her approach to reading this story was totally edge of your seat. I think she took this book over the top with her vocal skills. Great listen.

“This audiobook was provided to me on request by the author, narrator, or publisher at no cost in exchange for an unbiased review courtesy of Audiobookboom”

Aliens have invaded the farm!

This may be a short story but it is packed with action and horror. It is fast paced and will keep your interest from beginning to end

The narrator puts a lot of energy in this audio. Her performance is a joy to listen to

What made the experience of listening to Harvest Festival the most enjoyable?

Fantastic writing both in use of language and crafting of story. For a relatively short book it's an extensive journey into the imagination. Excellent combining of the English old world and terrifying modernity.

What other book might you compare Harvest Festival to and why?

Invasion of the Body Snatchers - the sacks! Ok that's a movie, not a book but ya know...

What does R J Alldred bring to the story that you wouldn’t experience if you just read the book?

Wonderful intonations of expression. He brings to life the internal worlds of the characters and the impossibility of the antagonists.

If you could take any character from Harvest Festival out to dinner, who would it be and why?

The daughter - her progressive character arc.

Wow… This book was like nothing I thought I would ever be interested in but I loved it.. It was grotesque and horrifying and kept me on the edge of my seat!! I enjoyed that as the reader you had to come to the conclusion of what the terrifying creatures were before the characters told you what they thought…
I was sent this book for a unbiased review.

R J Aldred narrates this nicely.Callum and Carris are married with children.They seem to be on the outs with each other when things go quiet.Next weird clouds appear in the sky.Rhen the terror begins.For bing a short book,there are a lot of details.Loved it!I was given this book free for an honest review.

Would you consider the audio edition of Harvest Festival to be better than the print version?

A unique and clever take on an alien invasion. I have no complaints about the story, and felt it flowed well. As far as I could tell from the audio version, it's written well. The imagery is great; probably my favorite thing about this book. It didn't make a difference to me that there weren't chapters, and that the story runs from start to finish. As far as the story, characters, plot, suspense, etc. goes, this is a great book. I was hooked by the end, and would continue reading to find out what happens next!

What didn’t you like about R J Alldred’s performance?

I grappled over whether this is a four or five star book because I didn't enjoy the narrator at all. Her voice didn't captivate me or keep me interested. I had to restart the first chapter three times, and found myself "rewinding" throughout the story. Due to this, It wasn't as suspenseful, terrifying, or creepy as I had hoped. I wasn't drawn into the story until the the family has to flee the house. In fact, I could have done without the entire beginning of the story. I'd much prefer to be thrown right into the action, and learn about the characters as it progressed from there. I don't know if my opinion of this would change or not if I read the kindle version, or if someone else narrated it.

From the time the family has to flee the farm until the end, I was hooked.

I was voluntarily provided this free audiobook to review from the publisher, author or Narrator

A short story that is packed full from the start. What's arrived and is breaking its way into and around the family home?
Atmospheric tale that will keep you hooked until the end.

Waho! Take a deep breath before you start because you won't take another one until it's over. An action packed, frenetically paced, terrifying tale, which switches from very normal and mundane family life to horror story in the blink of an eye. A very clever, well written short story that will have you checking and then double checking everything, especially the shadows! Prepare to be afraid!

Thoroughly enjoyed this book and highly recommend. Full of suspense and energy. My First audiobook in years and I will certainly be looking in to other titles by Karl Drinkwater. Talented writer