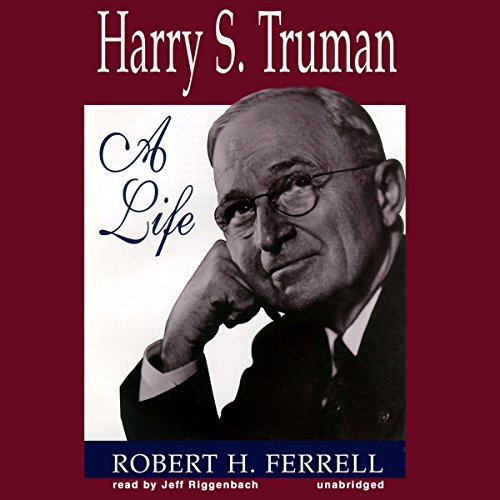 By: Robert H. Ferrell
Narrated by: Jeff Riggenbach
Try for $0.00

Few US presidents have captured the imagination of the American people as has Harry S. Truman. In this biography, Robert H. Ferrell, widely regarded as an authority on the 33rd president, challenges the popular characterization of Truman as a man who rarely sought the offices he received, revealing instead a man who - with modesty, commitment to service, and basic honesty - moved with method and system toward the presidency.

No other historian has ever demonstrated such command over the vast amounts of material on Truman's life. Based upon years of research in the Truman Library and the study of many never-before-used primary sources, Harry S. Truman: A Life is destined to become the authoritative account of the nation's favorite president.

The production of the recording was spiced together inelegantly. The narrator would read a sentence, then there would be an unnatural pause where you questioned if the playback had stopped, just to have the narration begin again.

Excellent book other than that.

Parts of this book were tedious but there were a lot of gems and this is worth finishing.

If you want a book to go to sleep by, this is the one. I LOVE biographies, but this one is like somebody reading a boring history book.