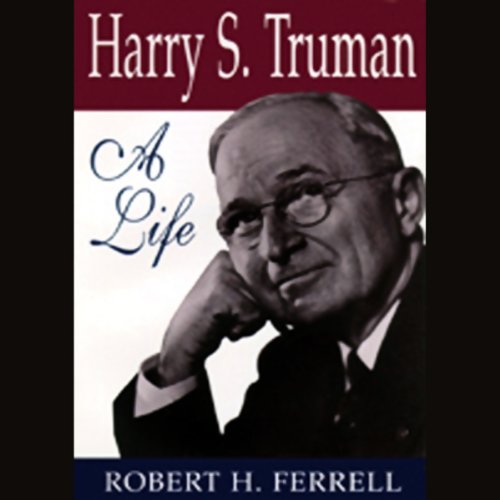 By: Robert H. Ferrell
Narrated by: Jeff Riggenbach
Try for $0.00

Few U.S. presidents have captured the imagination of the American people as has Harry S. Truman. In this new biography, Robert H. Ferrell, widely regarded as an authority on the 33rd president, challenges the popular characterization of Truman as a man who rarely sought the offices he received, revealing instead a man who - with modesty, commitment to service, and basic honesty - moved with method and system toward the presidency.

No other historian has ever demonstrated such command over the vast amounts of material on Truman's life. Based upon years of research in the Truman Library and the study of many never-before-used primary sources, Harry S. Truman: A Life is destined to become the authoritative account of the nation's favorite president.

The buck stopped with him. Check out all of our Harry S. Truman titles.
©1994 Curators of the University of Missouri (P)1996 Blackstone Audio Inc.
Politicians Presidents & Heads of State United States
Show more Show less

"An incisive study of a gutsy underdog who rose to the occasion." (Kirkus Reviews)

Very good but too long

A good book about a good president. There are times in the book where there seems to be too much detail - for me, at least.

I’ve LISTENED to biographies of several presidents (Jefferson, Jackson, Polk, Buchanan, Lincoln, Garfield, TR, Truman & Eisenhower to name a few that come to mind immediately.) This is, without a doubt, the driest.

I suspect it is the WAY the book is written as opposed to the narrator. In either event, it falls to the back of the line.

Truman was, by many accounts, a very funny man. With the exception of Truman’s life after the White House, which was moderately less turgid prose, this was a painful listen.

Not a very compelling biography

Narrator was monotonous. I was hoping for more detail regarding the atomic bomb, the Korean War.

It is what it is

It is a great Bio on a Great man. But it can be dry at times, and I guess I felt it lacked content on one of the things that defined his time in the White House... not much on the time leading up to make the decision on dropping the bombs.

Academic, occasionally dry but worth the listen

Having burned through several biographies (Hamilton, Einstein,Robert J Oppenheimer and four separate books on Theodore Roosevelt) it was time for me to branch to another historical figure. Harry S Truman fascinated me but I only had the history 101 treatment of Truman: successor to Franklin, made the decision to drop the A-bomb, and headed up the beginnings of the containment strategy of communism starting with the Korea War.

Harry S. Truman: A Life is a bit duller than most of the other biographies I read, where books like The Big Burn and The River of Doubt unfold like page-turning novels or the reader is left amazed by the brevity of details like in the case of Oppenheimer (ultimately making the reader wonder how he or she would have handled being accused of communism). Truman: A life mostly reports the events as they happened. The biography is at its best when the authors take stands on interpretations of events, such as Truman's decision to use the nuclear bomb option on Japan or Truman's stance on the Korean War, or Truman's disdain for McCarthy and critical of his lack of action. A personal mild criticism also comes in the when some of his more human moments underplayed such as when he asked the formerly disgraced Herbert Hoover to head up humanitarian aid to Europe post war.

The lack of edge comes to a close at the death of Hoover which simply reads his tombstone and closes without any further words, which feels cold and detached. There's no closing statements about the life of Harry S. or about what became of his widowed wife, his daughter and much about the historical weight of his presidency other than in early portions of the book. Character profiles of anyone outside of Truman are brief, his wife whom he was clearly dedicated to and his daughter feel like footnotes and accessories. By outward appearances, he was pretty close to them but the book failed to make much impression beyond that. Quite simply put, the title, "Harry S Truman, a life" is pretty accurate as its his life and hardly much beyond that. The best biographies often delve into the lives of other important people close the main subject to help better understand him/her (and it make usually for a better read).

Also to add to the sometimes anti-climatic nature of the biography, is Jeff Riggenbach, reads in a very academic measure, rarely using much variance of inflection to give quotes much weight or adding more life to the subject. He's clear, easy to listen to and a pleasant enough reader but lacks any flair, sad since Truman had some pretty great off the cuff quotes, and remembered as one of our most quotable presidents for his a-little-too-honest-for-politics remarks.

At times it was laborious to get through portions as names of cabinet members fly in rapid succession and other times I found myself truly enjoying the book. As far as biographies of Harry, A Life is "Where the buck stops". It could be better but it could be worse.