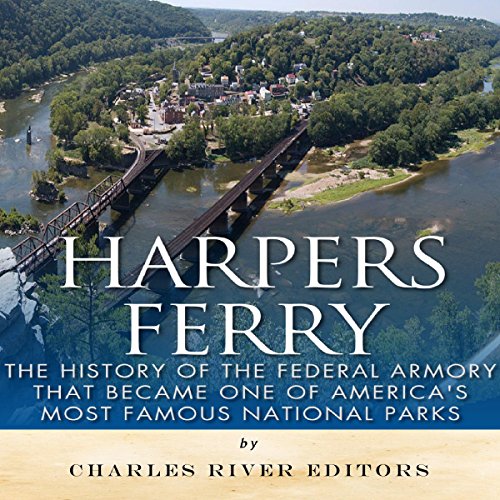 By: Charles River Editors
Narrated by: Jannie Meisberger
Try for $0.00

Harpers Ferry, still perhaps best known as Harper's Ferry, is one of the most unique places in American history. Situated near the confluence of the Shenandoah River and Potomac River, it is one of the few places in the country that practically borders three states, and the location ultimately compelled George Washington himself to place a federal armory and arsenal there.

Although Harpers Ferry was always a small, sleepy town, its industrial capacity to manufacture weaponry for the US Army made it important, and ultimately ensured its legacy thanks to John Brown's raid. After his activities in Bleeding Kansas, Brown spent the next few years raising money in New England, and in 1859 he began to set a new plan in motion that he hoped would create a full scale slave uprising in the South. Brown's plan relied on raiding the main federal arms depot at Harpers Ferry, thanks to its proximity to the South, after which he would take the seized weapons, gather slaves, and swell his numbers as he went. The slaves would then be armed and ready to help free more slaves, inevitably fighting Southern militias along the way.

Brown traveled to Harpers Ferry that summer, under an assumed name, and waited for his recruits, but he struggled to get even 20 people to join him. Rather than call off the plan, however, Brown went ahead with it, and that fall, he and his men used hundreds of rifles to seize the armory at Harpers Ferry. The plan went haywire from the start, and word of his attack quickly spread. Local proslavery men formed a militia and pinned Brown and his men down while they were still at the armory. A few of Brown's men were killed, but Brown was taken alive.

What listeners say about Harpers Ferry