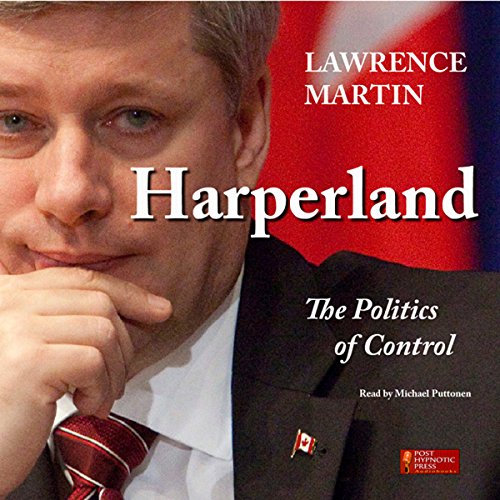 With another Canadian election slated for early May, 2011, Harperland: The Politics of Control, by Marin Lawrence, is a must read (or hear) before you go to the polls. "Harperland," the story Stephen Harper’s first four years in power, soared to the top of the best-seller lists in the first week it was out. Peter C. Newman called it “A book of revelations.... This is Stephen Harper unplugged.” Don Martin of The National Post declared that it was an excellent book that provides insights, which the Prime Minister could well learn from. In Harperland, Stephen Harper's governance comes under the microscope of prominent "Globe and Mail" columnist Lawrence Martin. Focusing on the growth of executive power under Harper and drawing on interviews with prominent insiders, Martin probes the smearing of opponents, the silencing of the public and diplomatic service, the secrecy, the prorogations, the unprecedented centralizing of power, and the attempted muzzling of the media. He examines controversies such as the existence of a secret dirty-tricks handbook, the Chuck Cadman affair, campaign financing, the dismissal of nuclear power head Linda Keen, the Afghan detainees cover-up, the turning of access-to-information laws into barricades to information, and more -- and lets readers draw their own conclusions. Tough but balanced, Harperland offers a clear picture of a skilled politician at a crucial point in Canadian politics.

There's something amiss in Ottawa

American politics seems by default prone to obstruction and inaction due to its excessive checks and balances with its division of the legislative and executive powers. But Canadian federal politics seems vulnerable to the other extreme of a despotic leader or an overmighty party consolidating too much power and subverting the democratic workings of parliament. Lawrence Martin in his admirably fine book details how Stephen Harper's PMO has acquired this dangerous expanse of executive authority.

Martin's extensively researched and well-supported arguments portray Harper as a secretive, paranoid, and vengeful autocrat who brooks no dissent, who's bypassed legitimate opposition by using dirty tricks in padlocking parliament through prorogation, ramming through omnibus bills, employing censorship controls on steroids, gumming up parliamentary commissions into Conservative misdeeds (even issuing a manual on how to do this to his underlings), muzzling members from speaking up for the interests of their constituents, engaging in underhanded backroom deals, porkbarreling favourable Tory riddings, etc. etc. etc.. There's ample evidence given to support Martin's contention that Harper is an ideologue who shows a contemptuous disregard for legitimate democratic dissent and even for empirical studies on the effect of minimum sentencing on recidivism, on the harm-reduction effect of InSite, on police commissioners' own support for the long gun registry, etc.

This isn't about Liberal or Conservative ideology but about maintaining something much more basic to a well-functioning democratic system. Many people have dismissed a lot of these criticisms out of hand by saying that politics is a blood sport, that this is mere Liberal gripping and partisan spin, or that the Grits did the like when they were in power. But all this minimizes what's going on under the Harper regime. Martin is right to decry the means used by Stephen Harper in undermining the spirit of the Canadian legislative system. And all this was written even before the Conservatives received the mandate of a majority government!

Every Canadian voter and Americans interested in Canadian politics should listen to this!