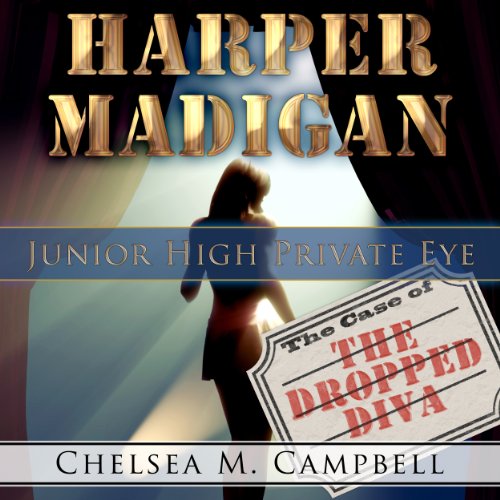 By: Chelsea M. Campbell
Narrated by: Nicholas Vennekotter
Try for $0.00

Seventh-grade detective Harper Madigan works alone. He doesn't need the vice principal assigning him a new partner to keep him in line, especially a stuffed-shirt wannabe-journalist. And he especially doesn't need his troublemaker ex-girlfriend showing up out the blue and asking for his help. She's accused of attacking the star of the school musical, and with her less-than-sparkling track record, she's only one suspension away from getting expelled.

Only Harper believes she's innocent, and now it's up to him to prove it, even if it means making an enemy of the PTA mafia, risking his agency, and facing the mistakes of his own dark past. But when his new partner insists on doing everything by the book, and his old nemesis - the one bully he can't catch - starts harassing his clients, it's going to take more than just detective work to solve the case.

You don't need a hall pass to enjoy this book.

I loved this book.I think this book is more aimed at a younger generation but even so I really enjoyed this book and in fact I stayed up well past me bed time to finish the book. I loved the characters and the way they have to learn to work together and the fact that no case is to small, it really gelled together to make an interesting and fun mystery good enough for a teenager or a mystery fan. The mystery it's self was good. and full of high school drama. The fact that most of the story takes place in a school was a fun element and took me back a few years, especially with those pesky hall passes. I hope there is another case for the junior high private investigator.
Harper Madigan is a high school boy who fights for justice against the school bullies, he doesn't wear a cape but he does wear a trench coat, if only the vice principle would let him. He works out of a condemned cleaning closet but his clients knows just were to find him when they have a problem and no case is to small for this P.i. To try and keep him in line more the vice principle assigns him an assistant in the hopes that he will be a good influence on Harper. But things don't to to plan when Harper's ex girlfriend future at the school is threatened. She is accused of pushing the lead actress off the stage, a crime even her own brother thinks she might have done. Harper is the lone voice to think otherwise, he just doesn't understand why she is keeping information from him. Can Harper find out the reason why the school PTA is trying so hard to expel his ex from the school?
I liked the narrator and thought she did a really good job of bringing the characters to life.
I was given this free review copy audiobook at my request and have voluntarily left this review.