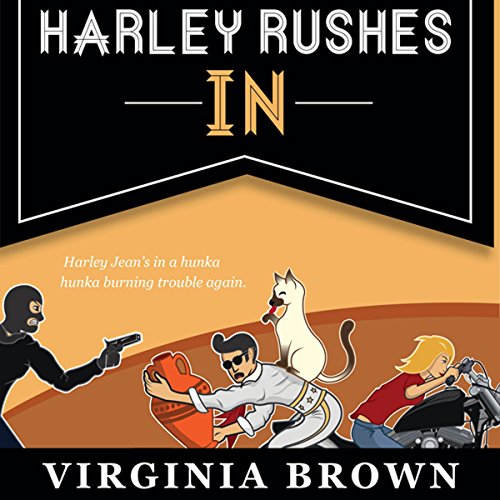 By: Virginia Brown
Narrated by: Karen Commins,Drew Commins
Try for $0.00

Harley Jean must be on the right track if someone wants to kidnap her....

Memphis tour guide and amateur crime-solver Harley Jean Davidson is up to her handlebars in mystery again. Last time, she was almost whacked by jewel thieves. Now her Aunt Darcy, an interior designer, needs Harley's help catching a smuggler of prized artifacts. When Harley finds Aunt Darcy's suspicious business partner hanging off her shop's elk antlers, Harley can't help but wonder if Aunt Darcy murdered him. Soon Harley's already quirky life spins way off the Normal Meter again, with another corpse in the mix, an assault by cranky farm animals, a kidnapping attempt, and surprise assistance from a temperamental Siamese cat. Add hunky detective Mike Morgan to the trouble, plus the usual collection of Elvis impersonators, psychics, and unpredictable relatives.

The city of the blues, the King and the mighty Mississippi, is about to get steamy. The jailhouse will rock, someone may get caught in a trap, and Harley's in the middle of it all - taking care of business.

Virginia Brown is the author of more than 50 novels, most recently the best-selling Dixie Diva Mysteries and the acclaimed mystery/drama Dark River Road.

What listeners say about Harley Rushes In

Harley is at it again. This time her aunt is in trouble. It seems her business partner is into smuggling illegal goods. When she hires Harley to look into him, he turns up dead.
Opinion
This book is a laugh a minute. While listening to the audiobook, I couldn’t keep the giggles down. The narration was on point with a sexy voice for Mike, Harley’s beau.

Harley Jean Davidson has stepped into more trouble than she can handle while helping her aunt Darcy spy on her silent business partner. Harley not only uncovers a smuggling ring of artifacts and illegal animal parts she uncovers a double murder that may involve her family. I loved how Virginia Brown weaved a web of suspense into this storyline because the twist at the end really had me going " what the hell I didn't see that coming at all" till the end. Narrators Drew and Karen Commins nailed it again with their superior voice changing skills which brings the characters to life. I love the quirky characters and the end made me laugh and jump for joy when Harley has an epiphany about her life. I highly recommend this book. I received this book from Audiobooks Unleashed and this is my honest unbiased review.

Great series and I love the characters! Good mystery

Wasn't expecting this script. I really enjoyed this book. It had some really snarky and humourous moments. I was given this free review copy audiobook at my request and have voluntarily left this review.

The author is not providing enough reasonable causes for Harley to interfere. I am irritated with her character because she is causing more trouble than situations merit. She is not TSTL but there isn’t enough to keep me going if book 3 continues this way.

They are easy listening, and the other characters are likable.

Narrators do a good job.

Stand By! Harleys Back!

My Review
Those who have read Book 1, Hound dog Blues, will know that Harley hails from a somewhat unconventional family, Her hippy parents, Diva and Yogi, are ageing not so gracefully. For the last few years though they have lived in a real house with proper toilets and everything! They don't give in to conventionality that easily though, as Diva continues to dispense her cleansing herbal teas and enigmatic predictions, and Yogi continues to grow his, er, "herbs" amongst the tomato plants. Oh, and he is also an Elvis impersonator who adores his crazy dog named King.
Harley truly appreciated the move to a more conventional life, but as time goes by, Harley herself becomes a little more unconventional, giving up her steady but boring job in a bank, she gets herself a job as a tour guide. She is a part time biker and recently, albeit inadvertently, has found herself working as a part time amateur sleuth. Her first foray into sleuthing was actually pretty successful and must have lit a fire in her belly, as no sooner was her first adventure over than her Aunt Darcy sought her help.
Once again Harley just can't say no! The offer of money helped her decide, and so starts her second adventure.
Harley begins her investigation with her usual single mindedness, heedlessly ignoring all advice from her friends and her very new boyfriend, undercover cop Mike Morgan. Harley (yes, again) finds herself in many a parlours circumstance! Mike and Harley must be very much in lust with each other as despite all his efforts to forbid her meddling, and all her hard headed stubbornness, (and the cat) they somehow keep the lust levels high.

This story is peppered with comic yet dangerous scenarios, most of which Harley brings upon herself because, well, she is always right! Yet with the luck that accompanies many a "cozy" heroine, our Harley wins through, albeit body and dignity battered and bruised, and usually with the loss of a mobile phone.
She also makes a new trusty friend, a rescued Siamese cat, they are an ill matched pair as Harley hates cats and the cat hates people, yet begrudgingly, they quite like each other. The cat moves in.
The author gives us a peek into the world of Memphis, we get to discover famous "Elvis" landmarks, the Elvis anniversaries, and of how the death of the King eventuates in a huge tourism business. This is Harleys' world and I'm looking forward to her next adventure.
I highly recommend reading the books in order.

Narrator
This is a dual narration by Karen Commins and her husband Drew Commins. I do still have issues with dual narration, nothing to do with talent or ability, but to do with the listening experience. There is a definite feel of the male voice being slotted in as it were. The transition between the two somehow needs to be smoother, I guess there must be reasons for recording them separately and then editing. Maybe the recording booth isn't big enough?
Apart from my little prejudice, I've always loved Karens' narrating, she just brings everything to life, both Drew and Karen have the wonderful sense of comic timing necessary for narrating the humourous cozy.

I was gifted this audiobook, without condition, by Karen Commins, this review is my honest opinion

Loved this book from start to finish great storyline
I was given this free review copy audiobook at my request and have voluntarily left this review.

I enjoyed this book. It is book two and although it picks from where book one left off and does mention quite a lot about the case I don't think you need to listen to them I order because it didn't make any difference to this case. I enjoyed the book because of the wide range of colourful and quirky characters and the fact that you never know what they are going to get up to next. The mystery was good and I liked the fact it kept you guessing and at the same time laughing. It is a fun light hearted series and I am off to start the next book but keeping an eye out for any geese.
Harley's aunt Darcy needs her help to find out who is bringing stolen treasures or smuggled artefacts to her shop and selling them. She suspects her business partner but before Harley can get more than a glimpse of him he Is killed, just after arguing with Aunt Darcy. Harley knows the alibi her aunt gave to the police is a lie but why would she lie? And is she protecting herself or somebody else? Harley can't stand by and watch her aunt get taken away to jail. Beside she was hired to find who was selling the artefacts and that is precisely what she is going to do. Despite the police and even her own boyfriend telling her to stay out of it. With the help from her friends Cammi and Tootsie, direr predictions from Divia and even some unexpected help from some animals can Harley find out what is really being hidden at the shop and keep her aunt out of jail.
It is a mixed review for the narrating team because I liked the female she spoke clearly and had plenty of range but to me the male only had two voices the boyfriend very deep and everyone else.
I was given this free review copy audiobook at my request from audiobooksunleashed and have voluntarily left this review.